The award-winning Pile Soil Analysis (PISA) project, investigated the interactions between soil conditions and monopiles, which are the most abundant offshore foundation. It delivered a new design method with the potential to reduce steel requirements in the embedded section of the piles to up to 30 percent in certain conditions, providing significant cost savings to the offshore wind industry. 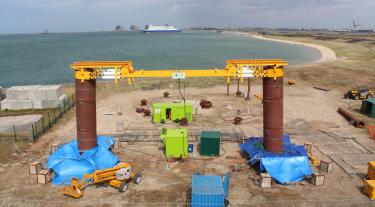 Previous estimates for the behaviour of wind turbine foundations were based on offshore oil and gas platform design methods, where piles are smaller in diameter, longer and must resist different loading conditions during use. This resulted in over-conservative design calculations for monopiles. The PISA design method specifically addresses larger diameter monopile geometries, as well as wind turbine loading conditions, to allow bespoke optimisation of turbine substructures for specific geographic locations.  In some cases, the steel requirements for the monopile might reduce up to 30 percent in the embedded section of the pile.

The PISA project involved large-scale field testing, which provided key data for the validation of the new design model. The tests were undertaken in at two onshore sites with characteristics similar to many conditions found in the North Sea; clay conditions in Cowden UK; sand conditions in Dunkirk France. The new knowledge is now publicly available for use by the wind power industry to bring forward new wind farm developments, as demonstrated by Ørsted, who have applied the new methods to their Hornsea windfarm.

Established in 2013 and completed in 2016, the project was a £3.5M joint industry project led by Ørsted, formerly DONG Energy, and run by the Carbon Trust’s Offshore Wind Accelerator Programme. The Academic Working Group was led by Oxford University, and involved Imperial College London and University College Dublin.

In December 2017, the PISA project won the BGA Fleming Award.