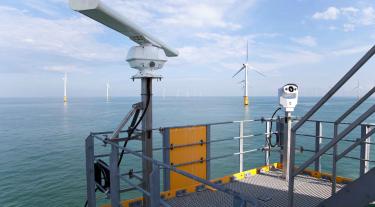 The Bird Collision Avoidance Study is the first of its kind employing a multi-sensor monitoring system, combining human observer-based tracking with a system that automatically recorded seabird movements, at a working offshore wind farm in the English Channel. Radars were also used to record data 24 hours a day for two years.

The multimillion pound, collaborative study was commissioned by 11 leading offshore wind developers, The Crown Estate, The Crown Estate Scotland and Marine Scotland, was supported with funding from the UK Government and was managed by the Carbon Trust. The project was developed and run with the support and advice from the UK and Northern Europe’s leading ornithologists and environmental advisors such as Natural England and RSPB.

During the two years of fieldwork a significant number of videos were recorded at a representative area of Vattenfall’s Thanet offshore wind farm, one of the largest in UK waters. This resulted in the analysis of over 600,000 videos, of which only 12,131 contained evidence of bird activity and only six collisions with turbines were observed. The analysis revealed that collision risk of seabirds was less than half of what would be expected based on current understanding. During the study seabirds were observed to exhibited avoidance behavior and change their flight path to avoid the turbines.

To obtain planning consent for an offshore wind development the planning inspectorate needs to consider the risk of environmental impacts, as well as any mitigation measures proposed by a developer. The developer needs to provide evidence of how seabirds will behave within and around the farm. In order to quantify bird collision risk with turbines, collision risk models (CRM) are used to estimate this impact. Although extensive studies have looked at migratory patterns and behaviour of seabirds around offshore wind farms, until now there was only limited evidence to substantiate their actual behaviour.

The conclusions from this research on collision risk will allow better informed wind farm design and consent decisions just as the next generation of more powerful offshore turbines are being tested and manufactured. As a result the research will support UK Government plans to rapidly and sustainably grow the offshore wind sector by 2030.

The research was designed to generate robust, empirical evidence on the levels of avoidance behaviour and collisions to improve collision risk models. This will provide greater certainty on the true impact of offshore wind farms on seabirds and the mitigation measures required.

Jan Matthiesen, Director Offshore Wind at the Carbon Trust commented: “Today marks the result of four years of collaborative work from a range of stakeholders, all focused on bridging the gap between the theoretical and real understanding of how birds behave around an operational offshore wind farm. In March 2018, offshore wind generated 12% of the UK’s total energy, its highest contribution to date. ORJIP Offshore Wind has been designed to help contribute to the environmental evidence base to pave the way for a sustainable rollout of UK offshore wind. This study marks a significant step forward on this journey.”

Piers Guy, UK Country Manager, Vattenfall said: “This pioneering study, hosted at Vattenfall’s Thanet Offshore Wind Farm, is a significant step forward in our understanding of the way in which seabirds avoid offshore wind turbines, and comes at a crucial time as the next generation of wind turbines are designed and developed.  This research will support UK Government plans to rapidly and sustainably grow the offshore wind sector by 2030.”

Paul Wheelhouse, Scottish Government Energy Minister said: “Scotland has tremendous potential for sustainable development of offshore wind and floating offshore wind sites and, to date, we have more than 4GW of consented projects, while Crown Estate Scotland are looking at future leasing opportunities.  This study therefore provides invaluable data for understanding the potential impact of offshore wind developments on seabirds as part of our efforts to develop this vital energy resource with due regard to the marine environment.

“The data yielded will therefore be of great help to inform our offshore wind consent and planning process, and help achieve our objective of growing a sustainable offshore wind sector, whilst preserving Scotland’s much loved wildlife.”

Julie Black, Senior Renewables Ornithologist JNCC said: “JNCC are pleased to see this significant piece of work reach publication. This project provides novel empirical evidence of avoidance behaviour in and around wind farms. JNCC are working closely with others including Natural England, Scottish Natural Heritage and the British Trust for Ornithology to translate the ORJIP project outputs and results into reduced uncertainty in wind farm impact assessments going forward.”

Tim Frayling, Senior Environmental Specialist Ornithology, Natural England commented: “Natural England acknowledge the significant achievement of providing empirical evidence of bird avoidance in relation to an offshore wind farm for the first time, and the progress in starting to address some key questions in this area. The proof of concept has been successfully demonstrated and we would look forward to seeing similar studies in different locations, including wind farms closer to seabird colonies.”

Dr Aly McCluskie, Senior Conservation Scientist, RSPB commented: “There is currently much uncertainty in our understanding of how birds behave in the vicinity of wind turbines. The ORJIP bird collision project has collected an unprecedented amount of data on the behaviour of seabirds in and around an offshore wind farm. These data and the project report form an excellent basis for future discussion and debate. The project has been a collaboration involving industry, government agencies and seabird specialists and as such is exactly the type of project we need far more of if we are to realise our ambitions for offshore renewable deployment at scale and in harmony with nature.”

The methodology for analysing the results was also developed specifically for the project, and is a key project output to be shared with the wider industry.

Specialist environmental consultancies, NIRAS and DHI were contracted to install state of the art monitoring equipment at Vattenfall’s Thanet offshore wind farm situated off the Kent coast, to monitor bird avoidance behaviour at spatial levels (ranging from 10 meters to 3 kilometers from the turbine).

The methodology for the data collection was based on the use of radars, which recorded data 24 hours a day for two years. The equipment was mounted on 4 individual turbines on the north east corner of the offshore windfarm. The conventional method of bird surveys only represent snapshots, and telemetry (remote data collection) only captures information on a few individuals, therefore radars have become an indispensable tool for obtaining long-term monitoring data on seabird behaviour at wind farms.

Both radar systems that were used for the study, the Local Area Weather Radar (LAWR) and the high performance SCANTER Naval Surveillance Radar, had previously been used in baseline and post-construction monitoring programmes in Belgium, Netherlands, Denmark, Germany, UK and the US. There is extensive experience using laser rangefinders to detect birds in offshore and coastal applications. The research focused on five seabird species of greatest priority to the offshore wind farm projects being developed in the North Sea at the time: Northern Gannet; Herring Gull; Lesser Black-backed Gull; Great Black-backed Gull and the Black-legged Kittiwake.