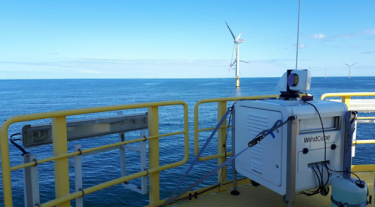 The measurement campaign for the Global Blockage Effect in Offshore Wind project (OWA GloBE), a joint industry project organised within the Carbon Trust’s Offshore Wind Accelerator (OWA), has been extended by four months. This will allow data to be gathered during the spring period, when atmospheric boundary layer heights are low and Global Blockage Effects (GBE) are expected to be more pronounced. Since its launch in early 2021, the project has continued to attract interest from industry, with four new partners joining the consortium, Ocean Winds, Ørsted, The Crown Estate and TotalEnergies, increasing the total budget to €5.9 M, including in-kind contributions. Following the completion of the measurement campaign, the primary data will be used by a specialist group of experts to validate and improve various computational models. Some of these models are already used to inform investment decisions; others represent the next generation of models.

An increasingly important phenomenon due to its potential impact on energy yields, GBE refers to the slow-down of the wind as it approaches a wind farm, and the corresponding speed-up of the wind elsewhere. Historically, wind farm designers considered only wake effects, i.e. the reduction of wind speed downstream of a turbine or wind farm. However, as wind farms get bigger, the impact of GBE grows, creating an increased need for the industry to understand this phenomenon to minimise financial uncertainty.

The OWA GloBE project aims to reduce such uncertainty by creating a comprehensive primary dataset, comprising of several terabytes of measurements, that can be used as the industry benchmark for assessing and quantifying the impact of GBE on energy production. The project aims to build industry consensus regarding how offshore wind farms interact with the atmosphere by answering three key questions:

The measurement campaign started at RWE’s offshore wind farms Amrumbank West and Nordsee Ost in the German Bight in September 2021. The two wind farms are separated by a strip of empty sea approximately 4 km wide, in which RWE is currently constructing its Kaskasi wind farm. Until the first turbines are placed, the Kaskasi site provides an opportunity to create a unique experimental setup to detect and quantify GBE both within a wind farm and between wind farms.

Seven scanning Light Detection and Ranging systems (LiDARs) have been deployed and commissioned on turbine transition pieces. Six devices scan the wind upstream, between and behind the two existing wind farms, and one measures the atmospheric boundary layer above the site. All devices have been equipped with bespoke sensors, so that the motion of the turbines can be accounted for.

In addition, a floating LiDAR has been deployed in the sea west of the wind farms to measure the undisturbed wind. An existing RWE on-site met mast has been refurbished with a profiling LiDAR and new instrumentation to measure turbulence and atmospheric stability parameters.

OWA GloBE is partnering with two publicly funded projects. The floating LiDAR buoy and the LiDAR measuring the atmospheric boundary layer are provided by Fraunhofer IWES as part of an extension of the X-Wakes project, funded by the German Federal Ministry for Economic Affairs and Climate Action. Data processing, including the application of machine learning processes to create more value from Lidar measurements, is performed by TNO within project AFFABLE, partially funded through TKI-Energy from the Allowance for Top consortia for Knowledge and Innovation (TKI’s) from the Ministry of Economic Affairs and Climate.

The pointing accuracy of the scanning LiDARs has been calibrated using a high-precision GPS-controlled drone, which enables very low measurement uncertainties to be achieved. It is believed that OWA GloBE is the first ever campaign to have used drones for calibrating LiDARs offshore.

In parallel, the project has assembled an Independent Technical Review Group (ITRG), comprising of six leading consultancies (Deutsche Windguard, DNV, EMD International, UL, Whiffle and Wood Group) working in close collaboration with DTU, Fraunhofer IWES and TNO. The ITRG reviewed the campaign design prior to installation and will have access to selected measured data to validate and refine a wide spectrum of models. This should allow the project to build cross-industry consensus on how blockage should be described, modelled and measured in the future. Frazer-Nash Consultancy has also been contracted to tune, validate and deliver coupled engineering models (building on previous work from the OWA) to predict the combined blockage and wake effect.

The RWE led project kicked off in early 2021 with support from the other OWA members: EnBW, Equinor, Shell, Vattenfall, ScottishPower Renewables, plus EDF Renewables, Leosphere and DTU as external partners. The measurement campaign will finish in May and will be followed by analysis, modelling, validation and reporting, to conclude the overall project by the end of 2022.

“The whole offshore wind industry will benefit immensely from this project as it will help us gain a better understanding of the Global Blockage Effect. We very much appreciate the support of the new project partners which will allow the extension of the offshore measurement campaign. OWA GloBE will allow us to close existing knowledge gaps and reach an industry-wide consensus on an effect that has a high impact on the planning and operation of offshore wind farms.”

“OWA GloBE’s collaborative approach aims to foster a common understanding across the industry and is another great example of effective joint industry projects accelerating the scale-up of offshore wind. The GloBE project is undertaking a significant measurement campaign, both in terms of its scale and its unique set up, to increase primary data on how the Global Blockage Effect impacts yield in operational wind farms. The decisive phase will be how this data can then be used to help improve existing computational models which are used to inform the cost of finance for future wind farms. The level of interest in the OWA GloBE project  has exceeded our expectations, reinforcing  the importance of improving the understanding of this phenomenon and its impact on yield at a time when offshore wind farms are expanding in size.”

“Ensuring that decisions on future offshore wind farm development are based on the best possible data and evidence is vital if we are to rise to the challenge of achieving Net Zero emissions. That’s why we’re supporting this pioneering initiative to better understand the impacts of the global blockage effect, working in collaboration with industry and some of the sharpest minds in the research community. The improved modelling techniques that are developed by this project will enable improved co-ordination, certainty and efficiency for UK offshore wind."

About the Offshore Wind Accelerator (OWA)

The Offshore Wind Accelerator (OWA) is the Carbon Trust's flagship collaborative research, development and deployment programme. The joint initiative was set up between the Carbon Trust and nine offshore wind developers in 2008, with the aim to reduce the cost of offshore wind to be competitive with conventional energy generation, as well as provide insights regarding industry standard (and best practice) health and safety requirements.

The OWA is one in a portfolio of offshore wind joint industry programmes led by the Carbon Trust, alongside ORJIP, the Floating Wind Joint JIP and the Integrator.

The Carbon Trust is a global climate consultancy driven by the mission to accelerate the move to a decarbonised future. We have been pioneering decarbonisation for more than 20 years for businesses, governments, and organisations around the world. We put impact before profit – and reinvest any surplus into achieving our mission. That means we are impartial, objective and true to our vision - where environmental sustainability and economic realities go hand in hand.

Drawing on a network of over 300 international experts across our current offices in London, Amsterdam, Mexico City, Beijing, Singapore and Pretoria, the Carbon Trust guides organisations through their journey to Net Zero. From strategic planning and target setting to delivery, activation, and communication -  we provide smarter ways to turn intent into impact. For further information please see: Climate Action Plans & Business Sustainability | The Carbon Trust.

RWE is leading the way to a green energy world. With an extensive investment and growth strategy, the company will expand its powerful, green generation capacity to 50 gigawatts internationally by 2030. RWE is investing €50 billion gross for this purpose in this decade. The portfolio is based on offshore and onshore wind, solar, hydrogen, batteries, biomass and gas.

RWE Supply & Trading provides tailored energy solutions for large customers. RWE has locations in the attractive markets of Europe, North America and the Asia-Pacific region. The company is responsibly phasing out nuclear energy and coal. Government-mandated phaseout roadmaps have been defined for both of these energy sources. RWE employs around 19,000 people worldwide and has a clear target: to get to net zero by 2040. On its way there, the company has set itself ambitious targets for all activities that cause greenhouse gas emissions. The Science Based Targets initiative has confirmed that these emission reduction targets are in line with the Paris Agreement. Very much in the spirit of the company’s purpose: Our energy for a sustainable life.

About The Crown Estate

The Crown Estate is a unique business with a diverse portfolio that stretches across the country. We actively manage our assets in line with our purpose: to create lasting and shared prosperity for the nation.

We manage the seabed, and half the foreshore, around England, Wales and Northern Ireland, and therefore play a key role in enabling the UK’s offshore wind industry, as well as helping to facilitate the development of sectors such as cables, pipelines, CCUS and marine aggregates.

Our portfolio also includes: some of central London’s best places to work, shop and experience; regional retail and leisure destinations across the country; a substantial rural portfolio; and the Windsor Estate, including the world-renowned Windsor Great Park.

Established by an Act of Parliament, we are tasked with generating profit for the Treasury for the benefit of the nation’s finances, this has totalled £3bn over the last ten years.