The PSEE programme supported a wide range of businesses of varying sizes across South Africa, by raising awareness of the importance of energy efficiency, and its potential to reduce costs and lower the environmental impact. 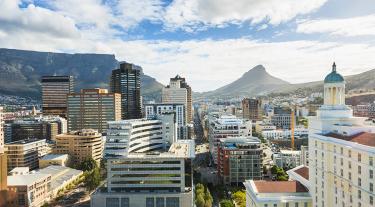 The power that drives South Africa’s economy is largely based on fossil fuels, with a significant reliance on coal which accounts for almost 90% of electricity generation. The availability of cheap coal, combined with subsidised electricity generation, has meant that the South African economy has been able to develop a solid base of energy-intensive heavy industry. As such, it is considered to be the world’s most carbon-intensive, non-oil-producing economy in the world. However this high demand for energy also presents challenges. Faced with an ageing and unreliable electricity supply infrastructure, which requires increasing amounts of maintenance to keep running, the country has experienced a prolonged series of sharp energy price rises.

There are a few factors driving the need for South Africa to improve on its energy management across business, domestic and public sector users. Between 2008 and 2013 the cost of electricity increased by over 20% a year, far outstripping the average inflation of 6.6% over the same period.

Added to rising energy prices, production was struggling to keep up with demand, leading to regular power cuts (known as “load-shedding”) to help even-out peak demand times. This can be acutely felt by small and medium-sized businesses that make up the majority of South Africa’s economy, as they are less able to absorb losses or overcome competitiveness challenges caused by a lack of power. Businesses either need to generate their own independent energy supply, or undesirably cease operations altogether during those times. This is not only damaging to individual businesses but to the economy as a whole. The central bank specifically pointed to delays in overcoming electricity supply problems as a reason to reduce growth forecasts during 2013.

Furthermore, South Africa is particularly vulnerable to climate change with a large proportion of the population likely to be adversely affected by extreme climate events in an already arid country. In an attempt to get the country on a lower carbon pathway the South African government launched its National Energy Efficiency Strategy which committed the country to a 12% reduction in energy intensity by 2015 for the whole economy, against a 2000 baseline.

The management of energy is often neglected, even though there is considerable potential to save energy and reduce costs. In South Africa many market barriers existed to the effective take up of energy efficiency measures ranging from a lack of confidence in the consultancy and advisor market to the level of technical knowledge of suppliers. Establishing a consistent approach to build the business case for energy efficiency and also increasing awareness of the significant cost saving opportunities that could be realised was also important.

It is within this challenging, but exciting environment that the Private Sector Energy Efficiency (PSEE) programme was devised with the support of £8.6 million awarded by UK Government’s Department for International Development (DfID). The Carbon Trust worked with the South African National Business Initiative (NBI), a non-profit public organisation, to design, set-up and implement the two-year PSEE programme in December 2013, designed to help businesses in South Africa to understand and benefit from energy efficiency initiatives.

The aim of the PSEE programme was to support a wide range of businesses of varying sizes across South Africa, by raising awareness of the importance of energy efficiency, and it’s potential to reduce costs and lower the environmental impact. The Carbon Trust supported the overall design of the programme to not only meet the needs to South African businesses but also achieve the stated aims of scheme from DfID’s perspective.

The Carbon Trust helped to train and build a dedicated in-house team of 18 staff to manage the PSEE programme and provided a range of technical advice throughout the duration of the programme, bringing over 15 years of experience in developing and delivering large scale energy efficiency programmes internationally to the PSEE initiative. This specifically focused on guidance on how to recruit, train and monitor the performance of consultant resource, development of event content and publications and energy management tools for the PSEE website.

The PSEE’s core element of support to businesses was expert energy management advice to help companies identify specific opportunities, provide an action plan on how to implement them, and importantly how to maintain an ongoing focus on energy efficiency once the PSEE engagement was complete.

All qualifying businesses had to be registered with CIPC (Companies and Intellectual Property Commission) in South Africa. PSEE support was provided on three levels to effectively and economically introduce energy efficiency advice to various sizes of business:

A method to track the programmes performance and deliver impact assessments which could be used to evaluate the scheme was also a critical part of the design, which the Carbon Trust was able to help with based on its previous experience of running multi-year private sector energy management initiatives.

An effective marketing campaign was a key element of the overall success of the programme. It was critical to create awareness of PSEE programme across the South African business community to drive the volume of applications needed to meet the PSEE programme’s objectives.

The Carbon Trust marketing team developed the strategy and, through a national competitive procurement process, helped to select local expert partners to deliver the marketing activities on the ground. The Carbon Trust also oversaw the creative development of the ‘Power to Save’ campaign from concept to final advertising campaign.

A mixture of national radio, press and outdoor advertising campaigns, email direct marketing to South African Corporates, Events, PR and social media was used to reach key the business audiences. The activity resulted in a significant uplift in awareness and interest in the scheme, evidenced in strong growth in the number of calls and emails into the enquiry lines, and ultimately supported the successful delivery of the programme.

The PSEE programme was successful as it introduced businesses to the value of energy efficiency measures as a way of helping them to manage rising energy costs which could directly benefit the bottom-line. While South Africa needs to pursue every available option to tackle its energy dilemma, energy efficiency measures are the most feasible and cost effective way to alleviate pressure on the energy system. Where new capacity (generation assets) will have a large impact on the amount of energy available they take a long time to bring online and often have high costs associated with them. Likewise, large scale demand response solutions would also have a significant impact, and could be implemented reasonably fast, but have a significant cost limiting their roll-out[v].

National energy efficiency programmes can have a more immediate impact, through the delivery of sector specific energy management advice that businesses can act straight away often at no or low cost, and the installation of new energy efficient equipment. Behaviour change can also be an effect method of controlling energy use; and can have a high impact, especially in large programmes.

The PSEE programme exceeded on expectations. During the two years of the programme nearly 25,000GWh of energy savings opportunities were identified, and, assuming the average consumption levels, would represent a 750MW saving to the grid. In terms of implementation, businesses went on to realise nearly 3,000 GWh of energy savings, representing over 2.2m tonnes of CO2.  The project leveraged R71 million of capital expenditure in energy efficient technologies and practices, which have an impressively short average payback period of 1.4 years.

During the course of the programme over 2700 individual businesses registered on the dedicated PSEE website.  The national series of workshops had almost 2000 participants in attendance. The on-site surveys performed for medium sized businesses was close to 1000 with a further 37 large businesses engaging in strategic energy management interventions and energy management updates.

The PSEE overcame a lack of awareness and understanding in the market about the benefits of energy efficiency and energy management. The programme performed an important role in helping businesses to initiate projects as it acts to overcome market failures. Workshops, expert advice and the PSEE website provide support to address the lack of knowledge surrounding energy efficiency benefits, identification and development of said benefits, and the awareness of finance and technology available.