The Carbon Trust was approached by Mahindra Sanyo to support the development of its targets, thanks to its world-leading track record of science-based targets work and a deep technical understanding of how to reduce emissions from heavy industry. 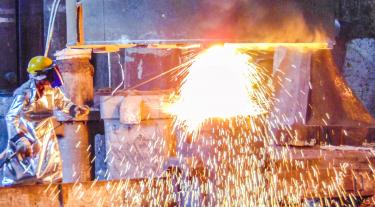 Mahindra Sanyo, a member of the Mahindra Group, is one of India’s leading alloy steel manufacturers that was created as a joint venture with the two Japanese companies Sanyo and Mitsui & Co.

The business became the first company from an emerging economy to set a science-based target on climate change and have this approved by the Science Based Targets initiative (SBTi). This officially recognises that the goal is in line with meeting the Paris Agreement’s ambition of keeping global warming well below 2°C above pre-industrial levels.

The company set its target following a pledge from the chairman of the Mahindra Group, Anand Mahindra, who committed that all his companies would do this at the World Economic Forum in Davos in 2018. This was alongside a wider challenge he set out to businesses around the world, calling for 500 companies globally to commit to science-based targets in advance of the 2018 Global Climate Action Summit in San Francisco.

The Carbon Trust was approached by Mahindra Sanyo to support the development of its target, thanks to its world-leading track record of science-based targets work and a deep technical understanding of how to reduce emissions from heavy industry.

The targets were set through the use of a Sectoral Decarbonisation Approach (SDA) methodology. This involved analysing data to establish a baseline from which to create targets and exploring emissions reduction pathways for two different company growth scenarios.

Following this process a target was set for reducing scope 1 and 2 operational emissions per tonne of steel produced by 35% by 2030, when compared to 2016/17 levels. This is in line with the emissions reductions the entire sector needs to achieve in order to deliver on the Paris Agreement.

To have a target approved by the SBTi most companies also need to set ambitious goals for reducing their indirect scope 3 emissions. To support this the Carbon Trust helped the company to calculate its global scope 3 footprint and set targets of also reducing its scope 3 emissions per tonne of steel produced by 35% by 2030, when compared to 2016/17 levels.

The Carbon Trust has been a key partner in the journey to setting science-based targets. Thanks to the support we received that we were able to become the first steel business, as well as the first company in an emerging economy, to have our targets recognised by the SBTi. Going through the process we have learned valuable lessons that we can now share with the rest of the Mahindra Group.

Our vision is to be the most socially responsible special steel manufacturer in India by 2019. This work has allowed us to take on a leadership position within the industry, both locally and globally. We are proud to be in-step with other leading companies around the world and take a robust approach to our environmental footprint reductions based on the best available science. For us this has always been the business case to future proof growth and profitability, responsibly.