The Route to Net Zero: A view from Europe

The Carbon Trust's Chief Executive Tom Delay, when welcoming delegates to the fourth instalment of the Route to Net Zero global summit series hosted by it’s Amsterdam office, emphasised the crucial role Europe has as a global leader in the fight against climate change. 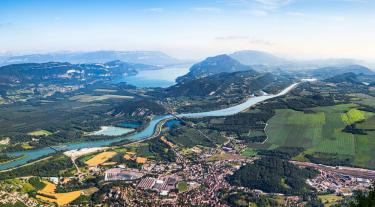 He made clear that the EU’s Green Deal will help to build “a resource-efficient, competitive economy that will show the world what can be done”.

But he also stressed the challenge of limiting temperature rises to 1.5C, rather than the 2C we had previously been aiming for just a few years ago. “We know how big a shift it is from 2C to 1.5C. It almost brings forward some of the decisions you have to make by 10 years.”

At the same time, he warned that none of the progress made so far can be taken for granted. “There is a lot of lock-in of assets and behaviours. And there was a real tide of greenwash in Glasgow – transparency is how you deal with that. Every stakeholder needs to ensure that transparency is an expectation.”

In her keynote address, María Mendiluce, CEO of We Mean Business, said that despite the ups and downs, COP26 was positive for the corporate world.

“The direction of travel for businesses is really clear. Previously, there was a lot of discussion about why and what. This COP was all about how – how best to cut emissions and by how much.”

Businesses need to set science-based targets to the highest level, which includes Scope 3 emissions in the supply chain. But to tackle these emissions requires a collaborative approach. “As companies set their ambitions, they will start to grasp opportunities through innovation and investment that will allow them to further improve those ambitions,” Mendiluce explained.

But accountability is crucial, she added. “Companies need to report progress and benchmark with others so we can see how things are progressing. That progress will inspire others so the more companies that engage with this the better.”

Companies need to engage with the supply chain, explicitly link climate actions to the Just Transition, and also talk to investors, who want to make their own portfolios Paris-aligned, as well as policymakers, to give them the confidence to introduce the policies that are needed. “They also need to talk to their industry associations. If they’re not doing the right thing, companies should tell them, and if they can’t convince them, they should leave.”

There is a big gap in most sectors between the leaders and laggards, noted Jan Noterdaeme, Head of External Relations for CSR Europe. “This is a fundamental problem – you cannot move on the climate agenda with only the peloton de tete (front runners).”

Industry associations could help to drive change throughout their sectors, but only 40% have time-bound targets and sustainability roadmaps. “Between global targets and targets at company level, there is a lack of mezzo targets being set at the industry level. We invite key players to engage much more with industry federations and associations. We need to mobilise CEOs of companies that present themselves as champions on climate and social transformation.

We’re all in this together

“Unless we all act together, we’re not going to meet our targets,” she added. But for that to happen, we need to equate climate change to people’s values and the way they live – for example, for a wine lover, it’s about how wine will taste in 2050 when some vines cannot grow properly. “We need to think about climate change as something that is happening now, that affects my world.

“The European Climate Pact is about having the opportunity to act and inspire each other. Anyone can take action, and everyone can contribute,” Balucka pointed out. EU measures such as the Green Deal and the Fit for 55 package  may show the way for emissions reductions, “but unless there is acceptance by citizens, we’re not going to make it”.

As well as all being citizens, “we are all consumers and hold enormous potential to make a difference,” said Bethan Laughlin, Sustainable Consumption Lead at Consumers International, and yet “there was a consumer-sized hole at COP26. Consumers represent an opportunity to step up the Net Zero transition and they are vital component of a successful Net Zero world.

“Consumers everywhere will have to change how they live. But these changes will only happen if consumers are supported by the marketplace. Nine out of 10 consumer organisations say governments are not doing enough to help consumers lower their carbon footprint.”

Consumers expect products to be low carbon by default, which means more progress on the right to repair and more circular economy measures, she added.

For Amazon, decarbonising its products started with a life cycle assessment of all its products, which revealed that on average, more than half the total carbon footprint comes from the electricity consumed when in use, followed by emissions from materials and manufacturing, said Rachel Praetorius, Director of Sustainability for Amazon Devices and Services.

“We focused on making our devices more energy efficient, with a low power mode. And we use recycled plastics, fabrics and rare earths as much as we can. We are making our manufacturing facilities zero waste factories and we help customers trade in or recycle old electronic devices – from any manufacturer,” she said.

A key way with which Amazon is helping customers make more environmentally friendly choices is through its Climate Pledge Friendly labelling system. This uses third-party certifications such as the Carbon Trust’s Reducing CO2 Product Footprint label to show which products have a lowered emission impact.

Andrew Murray, Senior Environment Manager at Vodafone Group, said that while everyone realises the urgency of acting to cut emissions, there is still a gap between what needs to be done and what is happening. “Into that vacuum, corporates, citizens and civil society are stepping up and saying: ‘if our elected representatives are not going to take this seriously, we will’.”

Maria Cristina Bifulco, Chief Sustainability Officer at cables group Prysmian, which has set a 1.5C science-based target, said that “we need to translate ambition into action”.

Initiatives such as the Glasgow Breakthroughs, the Glasgow Financial Alliance for Net Zero, and the Road to Zero, show that companies are not waiting to act, said Till Koetter, Senior Advisor on European and International Policy at Foundation 2°.

At the same time, there is growing demand from customers and investors for more transparency and credibility in these announcements, the Carbon Trust’s Veronika Thieme said.

There are often different definitions of Net Zero and it is difficult for stakeholders to assess if a target is truly ambitious and robust, said Olwen Smith, UK and Worldwide Regional Lead for CDP's Commit to Action Programme and the Science Based Targets initiative (SBTi). “It’s down to the lack of a globally accepted standard to benchmark against. Science Based Targets initiative has developed the first science-based Net Zero standard, which should provide much-needed clarity and credibility to companies’ Net Zero claims and combat accusations of greenwash,” she added.

And the long-term target must aim for deep decarbonisation – the SBTi standard calls for 90%-95% emissions cuts, rather than a huge reliance on offsets.

“We will see much greater levels of scrutiny of Net Zero targets and the underlying details in future,” Smith said. This makes it important to do things right from the start, which is where the help of expert third parties such as the Carbon Trust can help.

Many companies think that science-based targets are challenging and overwhelming, Bifulco said, “but it’s a great opportunity. It provides a framework to help you translate ambitions into goals. We had to prepare an action plan that helped us better understand our own footprint. It showed us that we have 300 times more emissions downstream than in Scope 1 or 2 emissions, so now we are proactively engaging with customers to identify innovative ideas to try to reduce power losses from cables. That benefits us and our customers. And it’s helping us to anticipate trends in other markets such as the US that started on this journey later.”

While corporates and financial institutions put a lot of energy into reducing their impact on the environment, it is also important to recognise the impact that this changing environment will have on these organisations, said the Carbon Trust’s Gregorio Giorgi, introducing a session on understanding and identifying climate risk. “Everyone is exposed to carbon risk, but the degree of that exposure is not being reported and disclosed in financial markets. It stops investors making the right decisions in allocating their capital. Climate risk management remains very much unpriced due to a lack of clear, consistent, comparable data on the impact on companies and the economy.”

“Everyone is exposed to carbon risk, but the degree of that exposure is not being reported and disclosed in financial markets. It stops investors making the right decisions in allocating their capital.”

Pressure from investors will be important in persuading companies to disclose properly, said Catharina Hillenbrand von der Neyen, Head of Research at Carbon Tracker, both individually and through groups such as CA100+ and the Net Zero Asset Owners Alliance.

We are close to a tipping point, said David Carlin, TCFD1 Programme Lead, UNEP FI2 and Luxembourg Stock Exchange. “Investor expectation that reporting is a requirement for doing business is key, and we have seen regulators mandating this in the EU and the UK, with the SEC set to release its own disclosure requirements in 2022.”

Reporting’s real impact comes when it is being used not just for internal decision-making within companies but also by external stakeholders to assess company plans and their effectiveness, he added. “What moves the needle is the ability to compare and fit financial information into your assessment. Quantitative disclosure is necessary to build comparability so you can see who are the leaders and laggards.

“But there are issues around the different methodologies that are used for emissions reporting, which is why transparency is so important.”

Targets must be consistent and clear to avoid greenwashing, von der Neyen added. “In some cases, companies plan to become Net Zero by planting forests the size of Brazil. It’s not credible. Investors hate targets they don’t believe.”

At the same time, waiting for more complete information is not acceptable, Carlin said. “Acting now is absolutely crucial. Incomplete information cannot be an excuse for inaction. It’s crucial to operate under uncertainty. It’s the reason we have risk management. It’s by getting started that you learn what your first steps should be. Disclosure needs to be accompanied by action.”