The Coal Asset Transition Accelerator (CATA) was officially announced at COP26 today in Glasgow by Laurence Tubiana, CEO and President of the European Climate Foundation (ECF). 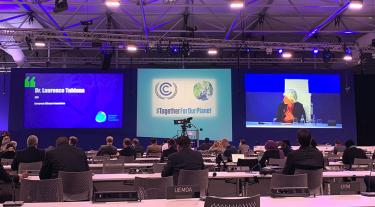 CATA is a first-of-its-kind platform focused on leveraging finance to accelerate the coal transition globally. CATA will empower key local stakeholders – governments, utilities, coal asset owners, financiers, and civil society organisations – with cutting-edge analyses, leading expertise, and a suite of tools and resources to transition from coal to clean energy.

The Carbon Trust will partner with Climate Smart Ventures (CSV), the RMI (formerly the Rocky Mountain Institute) and the International Network of Energy Transition Think Tanks (INETTT) to initiate CATA and identify other partners from around the world to accelerate the coal transition.

CATA’s 6-month Inception Phase is being incubated by ECF and funded by the IKEA Foundation and the Growald Climate Foundation, with a formal launch due in early 2022. See further details of the CATA Inception Phase.

The Carbon Trust’s involvement in CATA builds off the pioneering analysis carried out for the Asian Development Bank (ADB) to identify possible coal-fired power plants to be retired early through the Energy Transition Mechanism (ETM), for which a Southeast Asia Partnership involving Indonesia and the Philippines was also launched at COP26.

The Carbon Trust’s pre-feasibility study for the ETM included analysis of the coal fleets in Indonesia, the Philippines and Vietnam to identify the coal plants best placed for retirement based on local energy security, economic viability, and carbon reduction potential.

The Carbon Trust is to play a central role in a new partnership created to expedite the global transition away from coal power to clean, affordable power. The Coal Asset Transition Accelerator (CATA) aims to support the establishment of Coal Transition Mechanisms (CTM) that will finance an accelerated shift from coal use to clean energy. Equally, the initiative aims to ensure that this transition is equitable by fairly distributing the costs, benefits, risks and opportunities.

Laurence Tubiana, President and CEO of the ECF, announced CATA while addressing delegates at the Energy Transition Council (ETC) event in COP26 in Glasgow. An accelerated global transition away from coal use is both fundamental to limiting global temperature increases to 1.5 degrees Celsius and to the Carbon Trust’s mission of accelerating the move to a decarbonised future. The Carbon Trust is a core CATA partner, bringing significant experience related to energy systems, green finance and an equitable transition.

“What is clear is that economics and climate policy alone will not take coal off the system as quickly as the climate science urges and that financial mechanisms that respect regional and local context and take into account just transition are key”.

CATA aims to create an independent and geographically balanced centre of expertise to support an accelerated global coal transition. During a 6-month Inception Phase, incubated by ECF and funded by the IKEA Foundation and the Growald Climate Foundation, the Carbon Trust will partner with CSV, RMI and INETTT to initiate CATA and establish a wider network of partners – core, technical and in-country – to ensure the platform reflects the diversity of perspectives needed to meaningfully address this global transition.

During this inception phase, CATA seeks to open a dialogue on the global coal transition and welcomes additional partners that reflect a globally balanced collaborative effort, which includes economies already in transition away from coal and coal dependent countries from around the world.

“This initiative could not be more timely. As we rapidly approach the 1.5°C threshold, the urgency of accelerating the transition away from coal grows by the day. Unless we establish pioneering coal transition mechanisms that significantly shorten the lives of existing coal plants, we will fail to reach a decarbonised future in the necessary timeframe. CATA will help us achieve this.”

The Carbon Trust’s involvement in CATA builds off the ETM pre-feasibility study that was delivered for the ADB throughout 2021.The ETM, for which a Southeast Asia Partnership involving Indonesia and the Philippines was also launched at COP26, is an innovative blended finance model that is being trialled in Southeast Asia to accelerate the retirement of coal power plants and develop green, renewable energy to replace it.

The ETM concept is based on purchasing coal-fired power plants, bringing forward their retirement date and replacing them with cleaner power sources. This is particularly important in nations which would not otherwise be able to move towards cleaner energy sources and retire fossil fuel assets ahead of their standard decommissioning point.

The Carbon Trust’s pre-feasibility study for the ADB included analysis of the coal fleets in Indonesia, the Philippines and Vietnam to identify the coal plants best placed for retirement through an ETM. To carry out this study, the Carbon Trust developed and applied a Multi Criteria Analysis (MCA) framework to these three countries’ coal fleets.

The MCA framework was based on three criteria: how early retirement could affect the energy security of the local power grid; whether the power plant is economically viable, and; how the removal of the plant can contribute to carbon emission reductions. Please see here for the public report on the results of this pre-feasibility study.

“The Carbon Trust's support to the ADB on the ETM pre-feasibility study with their Multi Criteria Analysis (MCA) is giving a clear sense of direction as to which coal plants could be retired early. The Carbon Trust’s insightful inputs were instrumental in facilitating dialogues with key government stakeholders on early coal retirement across Southeast Asia and laid the foundations for the ETM to be launched at COP26.”

During the CATA Inception Phase, the Carbon Trust will further develop the MCA framework and identify opportunities to use it to support other countries accelerate their own coal transitions.