The city of Zhongshan in China’s Guangdong province is putting in place plans to become a centre for sustainable, low carbon economic activity, thanks to support from the Carbon Trust 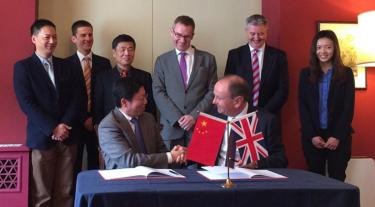 This ambition was confirmed at a signing ceremony that took place at the British Ambassador’s residence in Beijing on 3 March 2016.

The Letter of Intent signed between the Municipal Government of Zhongshan and the Carbon Trust is the first step in the creation of a low carbon development masterplan. The Carbon Trust will act a strategic adviser to help both the public and private sector in areas including improving building energy efficiency, industrial energy efficiency and supply chain emissions reduction.

Zhongshan is a prefectural-level city with a population of over 3 million and a GDP of around £20 billion. Located on the Pearl River delta it sits in the heart of the world’s largest manufacturing hub in China’s most economically developed province.

A significant amount of the manufacturing activity in the city is already focused on clean and low carbon technologies, such as LED lighting and wind turbines. Other major industries include textiles and small household appliances, where significant improvements to sustainability are possible.

One further aspect of the Carbon Trust’s work in Zhongshan will be taking considerable experience of incubating clean technology companies in the UK to help establish a local incubator. This will accelerate entrepreneurship and innovation in clean technologies within the city, with the ultimate aim of establishing a Low Carbon Service Zone. It is hoped this will attract international low carbon service and technology providers to Zhongshan.

The Carbon Trust has had an office in Beijing since 2009 and has delivered a wide range of projects advising Chinese policy makers on sustainability at both the national and local level, a number of which have involved Guangdong province. Recent work has included the development of a product carbon labelling scheme for the province together with the China Quality and Certification Center (CQC) in Guangzhou and the Chinese Manufacturers’ Association of Hong Kong. This project has since been extended thanks to funding by the Zhongshan government, with the Carbon Trust supporting delivery alongside the CQC and the Zhongshan Xiaolan Low Carbon Center.