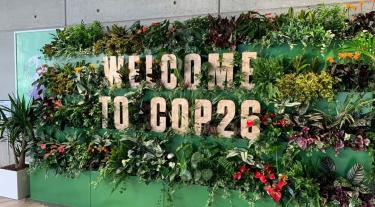 Tom Delay, Chief Executive of the Carbon Trust, commenting on the huge momentum the low-carbon sector is currently enjoying.

“The sector is flying, and that’s great,” he said. “But there is also a lot of greenwash about. It is inevitable if you have that level of momentum.”

This is partly why the Carbon Trust has repositioned its brand and, in the future, he added,

“…as a truly independent organisation, we will be bolder and more outspoken”.

Eliot Whittington, Director of Policy and Corporate Leaders Groups at the Cambridge Institute of Sustainability Leadership (CISL) told the meeting that, while the pledges coming out of Glasgow are welcome, because the 2020s is the decade of climate action “we need to move beyond setting goals into delivery. We have seen a lot of progress, but it is patchy progress. It’s not sufficient.”

He commended the UK government’s Net Zero Strategy, as a “really impressive document, setting out a comprehensive strategy – but there is still a significant amount of detail on delivery required,” he said. “At the same time, there is huge tide of UK businesses setting Net Zero goals and investing in achieving that. It’s a huge foundation to build on, but if we are to deliver on both business and government goals, we need to see a wave of implementation.”

But we also need to be able to measure the progress of this implementation, and Pauline Op de Beeck, Senior EU Business Development Manager, outlined the Carbon Trust’s new Route to Net Zero Standard.

Net Zero, which only emerged as a concept following the publication of the Intergovernmental Panel on Climate Change’s 1.5C report, is now considered best practice for business and governments, she explained. “The Carbon Trust has recognised this and repositioned itself to really take on the challenge of Net Zero. The new standard is the first certification that recognises progress on the journey to that goal, whether you are just taking your first steps, advancing or leading the way, our experts will help you navigate the challenging path to Net Zero.”

The Science Based Targets initiative has just released a Net Zero standard, which defines what Net Zero is, “but setting a target is one thing. Really transforming your business to achieve it is another and that is what our standard is here to help you with.”

It is important for companies to set interim and long-term targets, Op de Beeck said, “but it is also important to communicate that as a business you understand how you are going to achieve those targets. We assess the feasibility of your implementation plans, what forward planning you are doing, whether you are doing the correct financial and operational planning to meet your targets and we advise if there are gaps.

“The standard enables you to communicate internally and externally to really demonstrate that you are reducing emissions in line with, and preparing your business for, those long-term commitments. And it is not just your own operations but your value chain as well.”

The certification, which will be launched in January, is designed to increase ambition over time, and provide members with guidance to stay on track with science and best practice, she added. And it will evolve over time. “The pace, ambition and urgency of action is increasing all the time, and so the standard’s requirements must also increase to ensure that companies are delivering on that basis."

Opportunities and challenges in the voluntary carbon market

To have any chance of meeting our climate targets, market-based solutions from the voluntary carbon market will be crucial, said Vaughan Lindsay, CEO, ClimateCare. “Only a tiny percentage of emissions are covered by a carbon tax or carbon markets – both compliance and voluntary.”

The potential of carbon markets appears to have been recognised because the market has grown phenomenally over the past 24 months. Government targets fall well short of achieving the 1.5C target “but there is a real opportunity for corporates to step in and fill that gap. Carbon markets can play an important role.” The number of Fortune 500 companies with Net Zero targets has tripled in the last year has tripled, he pointed out.

The Taskforce on Scaling Voluntary Carbon Markets, set up by Mark Carney, former Bank of England Governor, sees the opportunity for a 15-fold growth in the sector, in part because 85% of Nationally Determined Contributions see a role for carbon trading to deliver their targets. “The voluntary carbon markets are an opportunity to help corporates deliver that growth at scale,” he added.

The growth in interest has led to a shortage of projects and credits, and a rapid rise in prices. That is pushing companies to invest directly in project rather than just buying carbon credits. This allows them to avoid price volatility, to have a closer connection to the project, and to focus on other benefits such as providing employment and education or preserving biodiversity.

With Net Zero now firmly established, Lindsay issued a challenge to the Carbon Trust, saying that being Net Negative is now what leadership requires.

“Net Zero is just being responsible. If you want to lead, you have to go beyond that.”

In a panel discussion on Net Zero target setting and reduction pathways – putting it into practice, moderator Dominic Burbridge, Associate Director, the Carbon Trust, dived into the challenges facing business in implementing targets. He asked what advice the panellists had for those just starting their journey to Net Zero.

It can be daunting at the start, said David Fitzgerald, Head of Responsible Sourcing Europe, Kellogg Group. “Understanding how to measure your emissions is key, so you need to understand the Greenhouse Gas Protocol and how to measure your Scope 1,2 and 3 emissions. And it needs to be data driven. In the past, a lot of the focus was on the narrative – now its on the data, and the narrative follows.”

Rose Sandell, Group Communities Director, Redrow Homes Limited, added that “people underestimate how much you need the buy-in and support of the board. If you don’t have that, there is no point.”

Paul Irwin-Rhodes, Head of Sustainability and SHE, Greggs, agreed that data is crucial and added that “you need a good partner to help you on that data journey, so you have verification that you’re moving in the right direction”.

“You also need to spell out the risks and opportunities – what you could gain as an organisation from moving down this pathway and what you could lose if you don’t.”

Fitzgerald said that almost 50% of his company’s emissions are Scope 3, so it is working to establish what its baseline emissions are. Sandell said that her company was on the early part of its journey, while Irwin-Rhodes said that Greggs has been working on its Scope 1 and 2 emissions for about 10 years “and all the low-hanging fruit has been picked”. Having completed a Scope 3 analysis this year, it plans to engage with suppliers in 2022. There is a real mix of awareness in suppliers, he added, with many SMEs in particular completely new to the subject.

Fitzgerald pointed out that Kellogg’s Scope 3 work has helped the company identify gaps and prioritise the areas it needs to tackle, particularly in its agricultural supply chain. “The antidote to greenwash is good data,” he added. “If you can demonstrate what you’re doing, you can refute greenwashing claims.”

Cooling is an area that must be tackled if we are to have any chance of meeting our climate targets, but it is often overlooked even though it is responsible for 7% of global emissions, said Sophie Bordat, the UN COP26 High-Level Climate Champion and Cooling Transformation Lead.

Three quarters of these emissions come from power usage, and so they will come down over time as power grids decarbonise, but a quarter are from the refrigerants and insulation foam used in refrigeration and space cooling. In 2017, 100GW of space cooling was added, more than the amount of solar capacity that was installed. And as temperatures rise, demand for cooling is expected to triple by 2050.

Tackling this will require genuine energy efficiency, different ways of reducing temperatures, and the use of Ultra Low Global Warming Potential refrigerants, as well as centralised options such as district cooling, Bordat said. “If we tackle this properly, we could avoid four to eight years of GHG emissions and help bring down the curve.”

Bringing the conference to an end, Anne Miller, Director, The Creativity Partnership, highlighted the threat to humanity that climate change represents, but added that it is a growing business risk as well. “The big dinosaurs died out because they couldn’t move fast enough, and it’s the same for businesses.”

Both the Queen (“it’s so irritating when they talk and don’t do anything”) and Greta Thunberg (“blah, blah, blah”), in their different ways, have condemned the resistance to change, greenwashing, and timid policies.

But innovation is S-shaped, she pointed out. “Nothing seems to happen for ages, and then it reaches a tipping point and things change faster than you thought possible. It happened with electricity, with cars, with the internet. But policymakers and vested interests often wildly underestimate the pace of change because they think it will happen at the rate it used to.”

An example of this is the International Energy Agency, which for years predicted solar power would grow much more slowly than it actually did, in the face of clear evidence of exponential growth. “In the early stages of the S innovation curve, the future is not like the past. Things interconnect and reinforce each other. As businesses, we have the power to move fast, be bold, ride the wave and create the future. It’s a bit scary, but it’s also exciting – so let’s do it.”