A delegation from Chile has travelled to the UK this week to learn about the UK’s experience in the energy sector with a focus on sustainability initiatives designed to develop smarter and more sustainable cities. 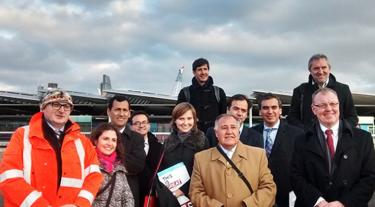 The Carbon Trust organised a packed agenda for the three day delegation which represented the Chilean Ministry of Energy, Ministry of Housing and regional authorities.

The Technology Exchange Mission to the UK was arranged as part of the 'Action Plan for the city of Antofagasta's Sustainable Energy Strategy' project, funded by the Foreign and Commonwealth Office (FCO) Prosperity Fund. The project, implemented by Fundación Chile, Carbon Trust, Plan CREO Antofagasta and the University of Antofagasta, aims to facilitate the deployment of a sustainable, cost-effective and low-carbon energy strategy for Antofagasta, particularly through local renewable energy and energy efficiency initiatives.

Antofagasta is a port city in Northern Chile, which lies over 1,000km north of Santiago. Predominantly known for its mining activity, the city has seen steady growth in construction development and population over the last decade. Chile is a country with abundant natural resources, which it has successfully used to drive growth and modernisation of the country. Its mining cities and regions now face the challenge of developing a critically important primary sector more sustainably. Antofagasta's long term sustainability goals include the development of a more diversified economic base, which can be supported by a city that provides a high quality of life and opportunities for residents.

During the visit to the UK the delegation met with a number of organisations ranging from Transport for London (TfL) to hear about the implementation of the Barclays Cycle Hire scheme in London and the roll out of LED street lighting; the Greater London Authority to understand the city-wide sustainability programme for London, and BRE to explore ideas on sustainable construction. The Chilean officials also visited St Luke's Primary School in Brighton to learn about the school's solar project as part of 10:10’s Solar Schools initiative and met with Network Rail to find out how a massive upgrade of Blackfriars Station saw the railway bridge being transformed into the world’s largest solar bridge.

The next stage for the development of the strategy will be to define and prioritise a portfolio of energy efficient projects, which can be developed into a framework with a business case to ensure the plan can become a reality.