The Offshore Wind Accelerator has supported a project to compare the conventional method of impact hammering with the vibration of steel piles in an on land test environment. The project began in the summer 2014, and aimed to prove whether vibratory piling can offer a faster and more environmentally friendly method of installing steel foundations for offshore wind farms and to validate the method with regard to structural behaviour. 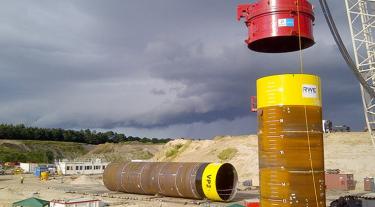 The project which was undertaken by RWE Innogy, Bilfinger Offshore, DONG Energy, EnBW, E.ON and Vattenfall has delivered positive results. The tests on land have highlighted that using vibration could make the pile installation process up to ten times faster than conventional hammering. The lateral bearing capacity of large diameter piles has been measured, leading to an initial methodology to predict the bearing capacity of vibrated piles.

The piles remained in the ground for a period of four months before undergoing static load testing, which examined how the piles behave when subjected to typical lateral loads experienced in offshore conditions. RWE Innogy was the project lead and contracted Bilfinger Offshore, who also sponsored parts of the project, to execute the major test works.

Jan Matthiesen, Director of Innovation at the Carbon Trust commenting on the positive results: “Finding innovative methods to reduce the cost of installation will help to bring down the cost of offshore wind, making it competitive with conventional energy sources. The project results not only demonstrate that vibro techniques could be a viable method for piling, but also evidence of what can be achieved through industry collaboration.”

“Throughout the project we have collected a lot of important data that can now be used to further develop the technology to bring it offshore”, explains Ben Matlock from RWE Innogy.

The findings of the research project have been made available to all project partners and the Carbon Trust Offshore Wind Accelerator.