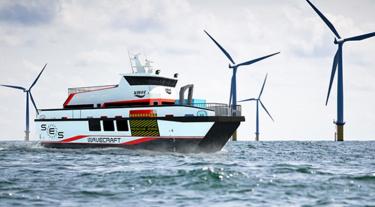 Umoe Mandal AS has secured a second order for its Wave Craft vessel from Umoe Wind AS, which will commence construction later this year and be delivered to Umoe Wind in 2015. The development of the Wave Craft vessel was supported both financially and technically as part of the Carbon Trust’s Offshore Wind Accelerator (OWA) Access Competition.

Wave Craft’s innovative design is adapted from vessels used by the Royal Norwegian Navy. It uses an air-cushion to achieve extremely fast speeds so it can reach a turbine in a shorter weather window than would be possible with a conventional crew transfer vessel (CTV). In addition, most of the vessel's weight is lifted by the air cushion, which greatly improves comfort and helps to stabilise the vessel for transferring crew on and off the turbine.

Umoe Wind AS, which owns the first Wave Craft currently under construction at Umoe Mandal AS, has entered into an 8 month contract with DONG Energy starting in March 2015. As part of this contract the Wave Craft vessels will be operating on the Borkum Riffgrund 1 Offshore Wind Farm in the North Sea, 54 kilometres from DONG Energy’s O&M base in Norddeich.

"DONG Energy has been part of the Offshore Wind Accelerator from the very beginning of the programme, and is delighted to see the continued work and effort paying off, bringing new, innovative, commercial vessels to market that have the potential to optimise operation and maintenance of our wind farms and thereby help us reduce costs for offshore wind.DONG Energy looks forward to testing the Umoe Mandal vessel at Borkum Riffgrund 1 and we hope that the vessel is both as fast, comfortable, reliable and robust as we hope and expect it to be."

"We are very happy to have a second order for our Wave Craft vessel. We believe it is unique in the market with its unchallenged combination of very high speed and comfort and turbine access in high wave heights. Our company believes there is a large market in offshore wind for this performance. The Wave Craft design is developed by Umoe Mandal based on its military Surface Effect Ship (SES) technology. Part of the development has been an extensive model test program, which has been supported by the Carbon Trust's Offshore Wind Accelerator. Umoe Mandal is confident that the Wave Craft will be an Operations and Maintenance game changer for the offshore wind industry."