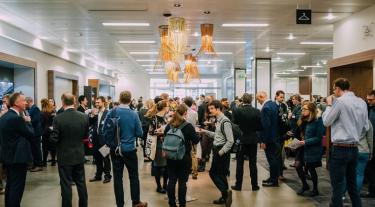 A climate leadership gap has emerged within the public sector, according to a survey of professionals attending the Carbon Trust’s Low Carbon Cities Conference 2018.

Whilst 90% of respondents believe that public sector leadership is very important in meeting international ambitions on climate change, just a quarter of those organisations have actually committed to align themselves to the ambitions of the Paris Agreement. However, a further 38% admit that they are currently considering how they can contribute to holding global warming well below 2°C.

There appears to be some positive progress being made, with over half the respondents believing that their organisation has improved performance on climate change and environmental sustainability when compared to the previous year. Although only two-thirds of respondents claim that they have a plan in place to take action.

The survey revealed that a perceived lack of available budget or finance is preventing beneficial projects from being implemented, with 35% of respondents citing this as the single biggest barrier standing in their way. There is also an apparent skills gap, with 46% of respondents stating that having stronger internal skills and expertise would help them take more effective action.

Speaking at the Low Carbon Cities Conference, the Energy and Clean Growth Minister, Claire Perry, provided a different perspective to the 68% of respondents that called for stronger leadership from central government. In her morning keynote she highlighted how government will rely on local leadership, with public sector professionals playing a key delivery role in implementing the UK government’s industrial strategy.

The pillar of the industrial strategy is this thing we call place, the areas that we live in and love. And why is that? Because you and the places you represent hold the detailed knowledge of what is going to work. The availability of local energy resources, the skills of your local colleges and universities, the potential for local clusters, what your building stock looks like, how you can incorporate low-carbon technologies in transport in your plans going forward.

The afternoon keynote at the event was delivered by Sir James Bevan, Chief Executive of the Environment Agency, the body responsible for dealing with the UK’s adaptation to climate change. With only 31% of delegates confirming that they had done a climate risk assessment and put plans in place, he had a stark warning about the likely impacts we will see in the coming decades.

[P]rojections and more recent evidence suggest that average UK summer temperatures could rise by up to 4°C by 2080; that sea level will rise by up to 1 metre by the end of the century (more in some locations); and that we will see more extreme weather, including heavier, more intense rainfall. Likely consequence: more frequent and more extreme flooding, greater coastal erosion and heightened risk of droughts. You don’t need to be a genius to work out what that could mean for vulnerable communities up and down the country, rural as well as urban.

In what has become the UK’s most important public sector sustainability event over the past decade, the Carbon Trust’s Low Carbon Cities conference had more than 250 professional attendees from organisations including central and local government, universities, healthcare trusts, public services, and international agencies. Delegates were able to discover the latest trends and best practice, including presentations from Mark Watts, Executive Director of C40 Cities and Silje Bareksten, Head of Smart City Oslo.