The Carbon Trust welcomes news that Universal Foundation, a Danish company that has been working with the Carbon Trust's Offshore Wind Accelerator, has won its first commercial contract. 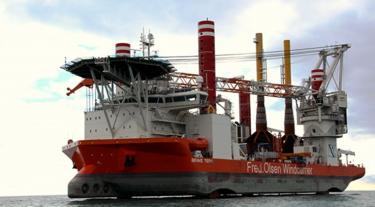 An innovative foundation for offshore wind turbines, supported by the Carbon Trust’s Offshore Wind Accelerator (OWA), has won its first commercial contract. The Lake Erie Development Corporation (LEEDCo) in Ohio has chosen Mono Bucket foundations for its Icebreaker offshore wind project. The technology has been developed by Universal Foundation (UF), Danish company that has been working with the OWA since 2011.

The OWA is the world’s largest industry collaboration focused on reducing the cost of energy from offshore wind through technology innovation. The programme is managed by the Carbon Trust with the support of the nine largest offshore wind developers in Europe. OWA backing has enabled UF to install two met masts at Dogger Bank in the North Sea in 2013. A year later, UF carried out a series of trial installations in various challenging soil conditions off the east coast of England. This campaign was a joint effort between UF, the Carbon Trust, Statoil, DONG Energy, E.ON and Statkraft. By winning its first commercial contract, UF has proven that Mono Bucket technology has now reached maturity.

UF’s Mono Bucket is a steel structure that consists of a mono-pile shaft attached to a large diameter bucket. The structure uses a suction system to drive the foundation into the ground, removing the need for pile driving or dredging. Once installed, the foundation works partially as a monopile and partially as a gravity base foundation. LEEDCo’s evaluation team chose the technology because of the significant cost savings it promises when compared with conventional turbine foundations.

Mono Buckets are also being considered for a number of European offshore wind projects.

"I am delighted that Universal Foundation has succeeded in securing a commercial contract. It is a testament to the dedication of the UF team and to the support provided by the Offshore Wind Accelerator. By recognising and funding innovative technologies, the OWA is driving down the costs of offshore wind and allowing new players to emerge on the global stage."

Jan Matthiesen, Director of Offshore Wind at the Carbon Trust