This year’s Corporate Sustainability Summit focused on climate leadership in order to encourage accelerated action from corporates in the face of climate change. 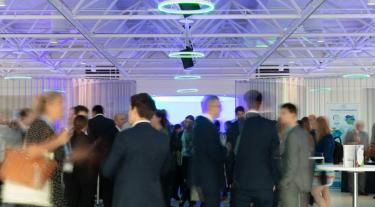 Who should be leading our response to climate change? Politicians, civil society, chief executives? Listening to the keynote speakers at this year’s Corporate Sustainability Summit it was clear that we must all play a leadership role.

Lord Duncan of Springbank, Parliamentary Under Secretary of State and Minister for Climate Change, opened the event by highlighting the international leadership challenge, especially when asking other countries to join the UK on a net zero journey. “We must be a model for others, but that will be a bigger challenge than it sounds,” said the Minister.

He acknowledged issues surrounding the equity of setting emissions targets internationally saying: “We have helped create the problem and now we are asking the world not to do as we did. We’re asking a lot but, if we don’t do that, there will be irreparable damage to the globe. We need to use our wealth to help the world mitigate and adapt to climate change.”

The Minister went on to challenge all those present to play their part in delivering the nation’s net zero ambitions. “We must all pull the rope in the same direction. You need to live up to these high ambitions. If you can’t do it, then no one can.”

View from the top

Commercially, Severn Trent has good reason to focus on climate change. Energy is its seventh largest cost and the company accounts for 0.3% of all energy consumed in the UK. However, Garfield pointed to stakeholder expectations as another key driver.

Stakeholders want us to do more than react; they want us to show leadership. It would be naïve to say it’s the only thing that they care about, but it’s definitely changing – especially in Europe

As evidence of that, Garfield cites the fact that millions of Severn Trent customers participate in the company’s online community panel and that the top two topics they comment on have shifted in the last 12 months to environmental investment and biodiversity.

The investor conversation is also changing, according to Garfield. “We’re talking about [climate change] more and Severn Trent now has funds that are purely ESG funds,” she said.

Garfield was clear that Severn Trent’s purpose is completely interlinked with climate change and that this also drives activity, such as the company’s commitment to renewable energy. Half of the company’s energy needs are met through self-generation (such as wind, solar, anaerobic digestion) and it plans to do much more.

“We really want to do more of the hard stuff … the hard yards, not the simple yards,” said Garfield. Examples of this ‘hard stuff’ include creating an in house design facility with 300 engineers and project managers in order to ensure that every new asset is less carbon intensive. The company has also established a worldwide innovation fund, comprised of 10 water companies, that Garfield likened to the Carbon Trust’s Offshore Wind Accelerator.

Garfield also advocated a big dose of ‘self help’ and, most importantly, establishing the right internal culture. From the recruitment stage onwards, Severn Trent ensures employees support its ‘triple pledge’ on carbon and she has made sure that carbon emissions are owned across the organisation: “carbon is too complex to sit in one team”. Garfield is also a very visible leader on climate change in Severn Trent – “it’s got to be led by me, not a head of sustainability”.

From corporate leadership, the summit moved on to the need for broad partnerships on climate change, with a presentation from Nick Bridge, Special Representative for Climate Change, Foreign & Commonwealth Office. Bridge began by saying “we will be leaders on this whether we like it or not” but outlined how economically we know that “it is in our best interest to be in a leadership position”.

He gave the dramatic increase in offshore wind energy as a good example of this – a shift that wasn’t thought possible. “These things happen fast and at scale when there is partnership between the government and companies, and buy in from civil society,” said Bridge.

The fact that COP26 will be hosted by the UK next year, in partnership with Italy, and five years after the Paris Agreement, presents a major leadership opportunity according to Bridge. “The critical thing to think about is that Paris was very country focused, but [COP26] will only work if everyone is in. We need to think of ways of really engaging business, local authorities, city authorities, regional bodies, and young people – who will be key. We’ve got to pull the marketplace into the right place,” he said.

Running out of time

The urgency of this call to action was then made incredibly clear in the presentation by Chris Rapley CBE, Professor of Climate Science, University College London. In a sobering keynote, Rapley demanded that the audience “confront the truth” and acknowledge that current efforts to tackle and manage climate change are not working.

Focusing on the huge and dramatic risks of climate change, Rapley laid out possible scenarios including the likelihood that vast areas of the planet will become uninhabitable and that the political and social challenges of today will be hugely amplified by the consequences of climate change – a “threat multiplier”.

With science now demonstrating that the physical risks of climate change may not be controlled by even a 1.5°C degree trajectory, Rapley added: “keeping control is something the British public is very concerned about, so we do need to think about this very seriously”. Rapley closed by emphasising that climate change is now an issue of risk management, which helped set the scene for a session that followed on the Task Force on Climate-related Financial Disclosures (TCFD) – the currently voluntary, but likely to become compulsory, climate-related financial risk disclosure recommendations.

Hill gave a business perspective, emphasising the benefits that she has witnessed at Landsec: “TCFD is a dream for a sustainability professional as it’s your chance to mainstream climate change risk and talk to colleagues who you may not have dealt with much previously,” she said. She also emphasised that it allowed for meaningful discussions with colleagues – with specific figures to inform these discussions.

When asked for advice on securing senior management support for TCFD, Hill spoke of the importance of tailoring the approach to fit the corporate culture. In Landsec, she built a coalition of interest with finance colleagues who, in turn, took the TCFD proposal to Landsec’s Chief Financial Officer. Her final piece of advice – ensure the figures go in the Annual Report: “if it’s considered to be a material risk for your business, the Annual Report is the correct home for it”.

Basirov also reinforced just how valuable TCFD is from the financial community’s perspective. “TCFD is a tool to shift capital in order to help mitigate climate change in the first instance. It is fundamentally a great foundation for the role the financial investment sector needs to play,” she said.

Basirov emphasised that TCFD is not intended to demonstrate that a company has removed all risk; rather it is demonstrating that a company is actively managing risk. “It’s not all about derisking but, ultimately, it identifies those companies that are preparing themselves for the transition,” she explained.

The call from both Hill and Basirov was for companies to start on the TCFD journey: “Don’t be afraid to start reporting … No one has the perfect report and your first disclosure may not be your best”.

The final keynote address came from Erik Lindroth, Sustainability Director, Tetra Pak, who focused on the leading role the company is taking in sustainability. The main driver for Tetra Pak has been the rapidly changing consumer attitudes and their shift in values, which “are changing the foundations of doing business”.

Interestingly, Nordic consumer research has highlighted that, although there has been a growth in consumers who are committed and concerned about climate change, there has also been an increase in those who are sceptical about climate change. In other words, a growing polarisation of perspectives.

Working with an environmental group to create the pots, Lush now buys around 35,000 pots a year and plans to increase this to 500,000 within 12 months. Lush pays €5 per pot – a high enough price to cover the cost of a forest restoration and regeneration programme. “They are relatively expensive but they are the future of our supply chain,” said Brewer.

The importance of focusing on supply chains was also a key message from the group session that followed. Representatives from Ball Corporation, Mace and OVO Energy, each explained how value chain data had allowed them to change the way they engage with their colleagues, customers and suppliers.

A framework for action

After a full day considering what it takes to lead on climate change, the final session outlined how the Carbon Trust is helping companies with their climate leadership journey. With input from Louise Needham, Sustainability Manager, Quorn Foods, and Anna Ma, Inspirational Business Operations and Environment, Sky, the session focused on the Carbon Trust’s Climate Leadership Framework, which was launched earlier this year and piloted by both companies, among others.

The framework provides a roadmap for companies to achieve climate leadership and this has proved to be a useful tool for both companies to engage colleagues in climate change from across the business.

It also focuses on what companies can achieve through innovation and influencing others. This was particularly powerful for Sky which, as a media company, has huge power to influence – for example through its Sky Ocean Rescue campaign. Ma explained how the Climate Leadership Framework helped Sky realise that they could do more to join up their work on climate change and their innovation activity, for example.

She finished by saying the framework had given Sky confidence that it is on the right trajectory.

For attendees, the day provided an opportunity to assess their own organisation’s trajectory towards net zero, as well as to acknowledge the scale of change that is required. With COP26 approaching, now is the time for collective ambitions to rise in order to deliver the necessary leadership on climate change.

Find out the winners of the 2019 Carbon Trust Assurance Award