Chair of the Carbon Trust shares energy insights in Mexico

“How do we get the energy we need for the carbon emissions the planet can afford?” 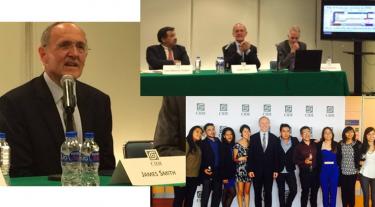 The Chair of the Carbon Trust, James Smith, accepted an invitation from the Mexican Government to speak at its recently launched Future of Energy in Mexico Conference Series 2016.

As part of the series James Smith had the opportunity to speak at Colef (El Colegio de la Frontera Norte) in Tijuana and CIDE (Centro de Investigación y Docencia Económicas) in Mexico City. Discussion centred on the great challenges and opportunities of the energy transition and how Mexico can continue to play a leadership role in the global effort to avoid dangerous climate change. His presentations began with the urgent need to decarbonise economies by a factor of ten in the first half of this century, with early and significant emission reductions. This presents an enormous change to a complex system. He discussed how energy systems modelling can be used to identify combinations of technologies and policies that offer the highest chances of success at least cost. To demonstrate such models, James referred to the UN Deep Decarbonisation Pathways Project. This is based on work by teams in sixteen countries accounting for about 75 percent of global CO2 emissions. The pathways show – by country and in aggregate – how the energy system can be changed. The pathway for Mexico was explored in detail as part of the talk, drawing on comparative perspectives from the US.

The programme of events, which began last year, is supported by Mexico’s Energy Sustainability Fund. It is designed to give the academic communities and industrial sectors, as well as the general public, access to leading global experts to hear about key topics affecting the energy sector worldwide. It also provides a platform to share experience and help shape the future of the energy sector in Mexico.