10 years of the Offshore Wind Accelerator and beyond

To mark the 10 year anniversary of the Offshore Wind Accelerator, the Carbon Trust welcomed guests from a wide range of industry to celebrate achievements over the last decade and look into the future to consider the role of offshore wind in the low carbon energy transition. 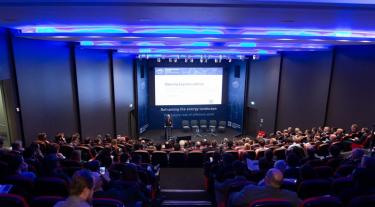 In 2008, when the Carbon Trust created the Offshore Wind Accelerator (OWA) programme, few would have predicted the scale of successes we are seeing in the offshore wind industry today. Offshore wind was just one of several emerging clean energy technologies supported by the Carbon Trust, to help unlock their potential to play a role in a low carbon energy system.

However, the past decade has seen rapid cost reductions leading to wide-scale deployment of offshore wind. Innovations – including those pioneered through the OWA – have played an important role in supporting the growth of the industry.

To mark the ten-year anniversary of the OWA, the Carbon Trust welcomed guests from a wide range of industry to celebrate the achievements of the OWA over the last decade and importantly look into the future to consider the role of offshore wind in the low carbon energy transition. The theme that emerged through the day was ‘collaboration works’ and it was great to welcome so many attendees, many of who had played an important role in making the OWA the world-class example of collaborative R&D it is today.

The unique and novel model of industry-led innovation has driven the successes of the OWA, where developers collaborate to compete, collectively signalling to the supply chain the challenges they need to address. This has helped to accelerate the development of numerous technology innovations taking them from concept to commercial, in addition to creating new industry standards to reduce the levelised cost of energy (LCOE) and make offshore wind truly competitive.

Darius Sneickus, Editor in Chief of Recharge, was the host. As someone who started his career, covering the oil and gas sector he was quick to acknowledge the unprecedented growth that the offshore wind industry has experienced.

His remarks acknowledged both the scale of achievement, as well as the new challenges and frontiers faced by the industry as it strives to stake its place as a leading energy source.

Scottish Minister for Energy, Connectivity and the Islands, Paul Wheelhouse MSP, then gave an opening address. He reaffirmed the Scottish Government's support for offshore wind for its ability to provide not only clean energy and affordable energy, but also its stimulation of coastal economic centres.

Chris Stark Chief Executive of the Committee on Climate Change gave the next keynote, in which he highlighted the key lessons learnt over the last 10 years since the passing of the Climate Change Act. He celebrated the achievements of the renewables sector and its contribution towards the decarbonisation of the UK's power sector at a speed previously thought economically precarious. He also highlighted the cost reduction in offshore wind, and the OWA's role in galvanising industry support towards key technological innovations.

Stark’s optimism was tempered by the acknowledgement that there is much further to go, not just in decarbonising power, but also heat, transport, buildings, industry and land use. He cited the latest Intergovernmental Panel on Climate Change's  1.5-degree report projections for the trajectory of emissions and the insufficient commitments from governments to mitigate the rise of CO2 concentration in the atmosphere.

The final panel of the day turned the focus to the future, exploring the next frontiers for the offshore wind sector in cementing its role in the energy transition. The panel included leading experts spanning the UK, Germany and the US. The six-strong line-up consisted of Martin Skiba of BWO, Mark Taylor, Deputy Director Energy Innovation at the Department of Business, Energy and Industrial Strategy (BEIS), Andrew Lever from the Carbon Trust, Baroness Brown of Cambridge, Rajnish Sharma from Equinor and Stephanie McClellan, Special Initiative on Offshore Wind in the United States.

The discussion was an animated appraisal of the current challenges faced by the offshore wind industry, whilst exploring opportunities for wider collaboration across the energy system to drive the low carbon transition deeper and faster.

Find out more about the Carbon Trust Offshore Wind Accelerator