Why do we need science-based targets on climate change?

As we increasingly see the impacts of a changing climate around the world, we have reached a point where the common consensus recognising the challenge posed by global warming needs to be translated into urgent action. 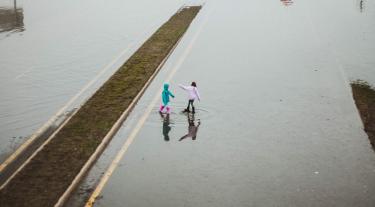 After years of dithering and dispute, businesses and governments around the world are broadly in agreement about the enormous risk that climate change poses to society and the environment. An overwhelming majority now accept that we need to do something about it – and soon.

In Paris in 2015 we had an historic and unprecedented moment of international consensus. Nearly 200 countries signed up to an ambitious agreement to keep global warming well below 2°C above pre-industrial levels, pursuing efforts to hold it at no more than 1.5°C.

Yet with a clear international agreement between governments, backed up by commitments at a national level, why are the targets set by individual organisations so important?

The simple answer is that the best available climate science tells us that as a society we are not doing anywhere near enough. At present the collective sum of all national commitments on climate change only account for around a third of the total reductions required to keep the world on a below 2°C pathway.

Although there is a mechanism in place under the Paris Agreement to ratchet commitments upwards at regular intervals, there is no certainty on whether this will happen and by how much pledges will increase.

In fact, since 2015 we have seen backpedalling from some countries on their commitments, most notably with the Trump administration in the USA. Despite emissions plateauing over recent years, in 2017 fossil fuel emissions reached a new record high.

Where nations are clearly not doing enough, what is done at a subnational level becomes of critical importance. And there are some reasons for optimism, with major commitments being made by cities, states and regions.  Yet perhaps the greatest reason for hope is the growing group of companies setting science-based targets on climate change.

These targets are not based upon what is easy to do, desirable to shareholders, or demanded by customers. They are objective goals based on our most advanced understanding of how greenhouse gas emissions impact the climate.

Today around 500 companies – collectively accounting for a substantial chunk of the global economy, and a not insignificant proportion of all global emissions – have either set, or committed to set, science-based targets that are genuinely in line with a below 2°C future. And thanks to the example these companies are setting for their industry peers and supply chains, the momentum behind the movement continues to grow.

If we are going to have a reasonable chance of avoiding the worst consequences from climate change, it is imperative that we close the gap between the ambition of the Paris Agreement and the action objectively required to deliver on it.

This is the first in a series of five articles on science-based targets, first published in 2016 and updated with the latest developments: