Our Hydrogen Insight Series is a 3-part series where we will be sharing our views on hydrogen's potential, the barriers to deployment, and how to overcome them, providing also examples of some tangible solutions to help us accelerate to a decarbonised future. 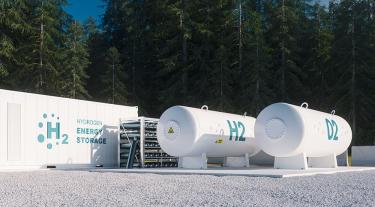 Hydrogen – the world’s oldest, simplest, and most abundant element has been floating around the energy sector as an alternative vector for many years. Yet, due to its high production and storage costs, it has always been considered a niche solution with little incentive for innovation.

We cannot forget the energy crisis is occurring against a backdrop of increasingly extreme climate events, displacing an average of 22.5 million people every year since 20081. More than 70 countries have set Net Zero targets, meaning decarbonisation cannot slip from our agenda3. Clean hydrogen – either produced by electrolysis using renewable electricity or natural gas reformation with carbon capture and storage - will be especially crucial to decarbonise sectors where electrification is not feasible or is too costly, such as long-haul transportation and industry.

With gas prices soaring in many countries (eg in the UK gas prices are ten times higher than their decade average2), the case for innovation and cost reduction is ripe. The impact of the energy crisis will not be limited to rising bills for households as steelmakers, chemical factories, and manufacturers are all feeling the impact of rising energy prices. When produced by electrolysis or biomass gasification, hydrogen offers a home-grown alternative that is not at the mercy of global fossil fuel markets. It is therefore becoming an increasingly viable option for struggling sectors.

While the security and environmental benefits offered by hydrogen are widely acknowledged, the contribution that it can make to a future energy system is less well known. Systems dominated by variable renewable energy require higher levels of flexibility, energy storage, renewables integration and system resilience. Hydrogen can offer all of these:

Due to hydrogen’s versatility as an energy vector, it can help to tackle this three-pronged challenge – energy security, decarbonisation, and energy system resilience. However, it is not a silver bullet. Studies show that hydrogen is an indirect greenhouse gas, though emitting no carbon dioxide at the point of use, reacting with greenhouse gases in the atmosphere to increase their global warming potential4.

Any leakage of hydrogen into the atmosphere during production, storage and distribution will consequently result in indirect global warming. We must therefore proceed with caution, addressing hydrogen’s high cost and barriers to its deployment with targeted innovation to ensure it is integrated into our energy systems in the best way.

In part two of our Hydrogen Insights Series, we will look at the barriers to its deployment – technical, regulatory, and economic. Only by analysing and addressing these barriers will we realise hydrogen’s potential.