Full steam ahead on the voyage to decarbonise the shipping sector

In 2019, 11 billion tons of goods were transported by sea, with annual shipping exceeding £10 trillion, accounting for 80% of the world’s trade.1 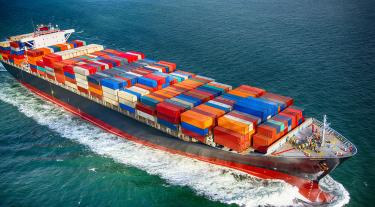 Transporting goods on ships can be 17 times more fuel efficient than air, and 10 times more efficient than by road. However, the most recent figures suggested that shipping represents almost 3% of global CO2 emissions2, and is projected to rise to 10% if left unabated.3  There have been suggestions by some scientists that maritime shipping could account for 17% of total annual CO2 emissions by 2050 – a startingly high percentage.

Like many other industries on the journey to Net Zero, shipping has been set a challenge to decarbonise, with an ambition to phase out greenhouse gas (GHG) emissions completely, in line with the Paris Agreement temperature goals. The International Marine Organization (IMO) is currently targeting a 50% cut in emissions from the global fleet by 2050 compared with 2008 levels, with at least a 40% reduction in carbon intensity by 2030. However, there is ever-growing industry and political pressure to raise that 50% goal to 100%.

An ocean of opportunity

The total global shipping fuel bill is approximately £71 billion annually, which should represent an attractive economic opportunity for fuel produced from renewable sources, as well as improved engine and fuel efficiency, rather than extracting further hydrocarbons from the earth.

Society is now more conscious than ever of the potential devastating consequences of climate change. As individuals, we are becoming more aware of our carbon footprint, leading to a greater understanding of where our consumer goods come from, how they are manufactured and the way they are transported to their ultimate destination.

Large consumer goods companies are becoming wise to the fact that public perception on this matter affects their brands and ultimately their profits. In 2021, nine global companies including Amazon, Ikea and Unilever, signed up to a pledge to only move cargo on ships using zero-carbon fuel by 2040. The hope is that this aggressive target will push the heavily polluting shipping industry to decarbonise faster.

With all of this in mind, the Carbon Trust is currently collaborating with a number of organisations seeking to decarbonise the industry and harness massive potential cost reductions in the process.

At present, deep-sea ships rely on marine heavy fuel oils, remnants of the hydrocarbon distillation process when all other, more refined fuels such as kerosine and gasoline have been extracted. These are heavy GHG emitters and therefore the sector must adapt and seek new alternatives to decarbonise.

In addition to this, the vast shipping industry is somewhat disjointed in terms of a collective voice and direction that needs to be taken to reduce carbon emissions. This is in part due to the various alternative fuels that have different offerings in potential carbon reductions, cost, technical readiness, and commercial viability. These alternative fuels now include liquefied natural gas (LNG), methanol, ammonia, biofuels and hydrogen. Furthermore, the types of ships in the maritime sector also vary, from specifications, such as size, intended distance they will travel and the cargo they will carry, which typically requires different fuel solutions.

Shipping owners and operators are currently focusing on engine and fuel efficiency, opting for various lower carbon-intensive alternative fuels such as LNG and methanol to reach short-term decarbonisation targets. However, to reach Net Zero, the sector will ultimately need to switch to zero-carbon alternatives such as hydrogen or ammonia, which will present significant logistical and financial challenges, but also numerous opportunities. These zero-carbon fuels will in turn need to be generated from zero-carbon renewable sources such as offshore wind or solar. An added challenge is that zero-carbon fuels have lower energy densities compared to current heavy fuel oils. This means larger volumes will be needed for a voyage. For example, hydrogen has only 25% of the energy density of ammonia, which itself has 50% that of current hydrocarbon-based fuels. There are therefore many factors at play here.

A key barrier to change is not only technology but also establishing infrastructure and reducing cost. There are potential markets that could become exporters of zero-carbon fuel for the shipping sector.  Iceland, Ireland and Greenland, for example, have incredibly attractive offshore wind resource potential (especially in deep water) which could be used to produce and export renewable shipping fuels, such as ammonia. Likewise, countries with high solar potential, including Morocco and Australia, could also export zero-carbon fuels.

The Carbon Trust’s ongoing R&D, deployment programmes, and initiatives naturally are working in collaboration with the sector to reduce maritime and shipping emissions, develop industry best practice, and trigger the development of new industry standards.

The latest programme currently follows a similar model to that of the flagship Offshore Wind Accelerator programme established in 2008, with ship owners and operators at its heart. We will engage with innovators, industry stakeholders, engine manufacturers, fuel suppliers and academic research institutes to support the best new ideas on their journey to market.

Ammonia, fuel cells and carbon capture will have a part to play in the long term, but these fuels and technologies still require development. Our leading collaborative R&D programmes can provide industry consensus, aligning views on alternative fuel pathways and instigate types of change that could never be achieved by a single shipping owner or operator.

The water might get choppy on the journey to Net Zero, but buoyed by innovation and collaboration, a sea change in the shipping sector can happen.

The long-term temperature goal of the Paris Agreement is one goal, establishing 1.5°C global mean temperature rises above pre-industrial levels, as the long-term warming limit. To achieve this, Net Zero CO2 emissions need to be achieved globally around mid-century and net zero emissions of all greenhouse gases shortly thereafter.

Climate change will result in sea-level rise, salinisation of agricultural land, desertification, growing water scarcity, mass migration and climate events such as flooding and extreme storms. As well as its serious impact on the environment and people, climate change is one of the biggest threats to global economic stability. If global temperatures rise by 3.2°C by 2050, it could wipe up to 18% of GDP from the worldwide economy.