Finance and Investment in the Biofuels Sector

Viewpoint from Al-Karim Govindji, Technology Acceleration Manager, and Jenya Khvatsky, Manager, Innovation, on finance and investment in Biofuels as an alternative, lower carbon fuel for transport.

Road transport represented 76% of total transportation fuel requirements globally in 2010. Aviation takes up just 10% and Marine another 10%. Transport sector CO2 emissions were almost a quarter of global emission, and cars (light duty vehicles) were 41% of this.

Biofuels are an alternative, lower carbon fuel for transport. Engines running on biofuels do emit CO2 just like petrol or diesel. However, biofuels use plants and trees as feedstocks that need CO2 to grow. And so biofuels do not add additional CO2 to the atmosphere. 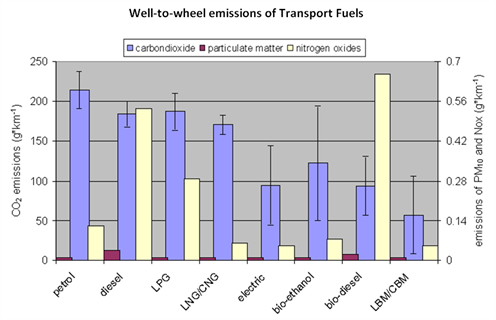 The biofuels produced today are principally for road transport, the dominant transport segment and that is also supported by significant subsidies in most countries, unlike for other transport uses. These fuels are blended (typically up to 5%) with traditional petrol or diesel. Production has been growing substantially over the past decade. Key producers include the USA (43%), Brazil (26%), Germany (4.9%) and France (3.9%). 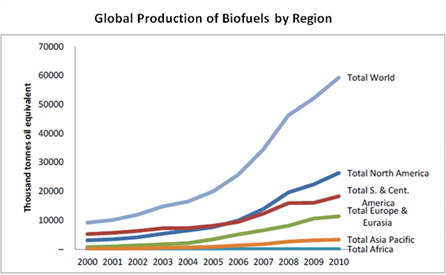 The bulk of biofuel production converts first generation feedstocks, such as corn and sugar, to bioethanol. The global market for first generation biofuels in 2011 was worth US$83 billion[2]. However, there are increasing concerns over the sustainability of these feedstocks, including the need for large amount of land and water that increases food prices and can impact rural populations and wildlife, and use of conversion processes that require energy as well as fertilizers and that limits CO2 reductions. This indirect land use change (ILUC) is an unintended consequence of use of first generation crops and has rightly prompted many fuel developers and fuel users alike to focus on second generation or “advanced” feedstocks, such as municipal waste and biomass. These are non-edible lignocellulosic materials like wood and straw, often grown on marginal land, requiring less water.

As Fig. 4 above shows, there is no volume production of advanced biofuel today. Converting advanced feedstocks to biofuel is challenging as each requires new and untested technologies. So, for example, pyrolysis-derived biofuels is still in early stages of development. Today, they are not commercially viable, as seen in Fig. 5. But while costs are likely to remain higher than for first generation for some time, we expect the cost reduction potential for earlier stage technologies that have not been proven at scale of 30-50% over the next decade, with a further 20-30% reduction by 2050 from component level improvements and efficiency gains[3]. In addition, second-generation biofuels significantly widens the feedstock options and that in the long term are likely to be needed to satisfy demand.

The transition from first generation to advanced biofuels, and the significant complexity of the advanced technologies likens the space to the personal computer industry in the late 1970s and early 1980s: many competing technologies fighting for platform dominance.  The biofuels industry is still awaiting its Bill Gates and Steve Jobs to emerge.  There is currently no clearly dominant technology:  gasification, pyrolysis, enzymes, (to name a few) are all competing for prominence.

Much of the production to date has been possible through government subsidies to producers in the form of tax reductions. Global subsidies in 2011 were $22bn[4], mainly in the US and EU. Most of that goes to first generation biofuels. The US has targeted 36bn gallons of biofuels to be blended into petrol and diesel by 2022 (of which 13bn gallons should come from advanced biofuels), which does provide a demand signal for investors but needs to be backed by financial support. The EU's Renewable Energy Directive (RED) requires all member countries source at least 10% of their road transport fuels from biofuels by 2020.

In the UK, the Renewable Transport Fuel Obligation (RTFO) obliges companies providing more than 450,000 litres of fuel for road transport annually to source at least 4.75% over this amount from renewable sources. Suppliers in return receive one Renewable Transport Fuel Certificates (RTFC) per litre of biofuel, or kilogram of bio-methane, supplied. However, this is going to first generation biofuels. Greater incentives for advanced biofuels could help make the economics more attractive to investors.

The successful financing of an ethanol or biodiesel project requires a substantial amount of capital. The cost of constructing such a plant producing 50 million gallons per year can easily exceed $80 million. And so, governments can support biofuels development in a number of other ways that can attract technology developers, something that is sorely needed to drive down the costs of production. These include: (i) grants for R&D funding to academia and for demonstrator projects, (ii) loan guarantees for project finance; (iii)financing via their Export-Import Banks; and (iv) bonds.

In the UK, for example, government supports biofuels R&D targeting areas where UK has capabilities and need:

Just this month, the UK Department for Transport announced funding of £25m for a demonstrator capable of turning waste into biofuel. There are still additional areas the government could support further development, for example around catalyst intensification.

The US is estimated to support R&D of advanced biofuels to the tune of US$1bn, Canada at US$430m (through Sustainable Development Technology Canada) and Australia at US$12mn[5] through its Australian Renewable Energy agency.

Loan guarantee programmes, usually for large scale ethanol plant projects, have been popular in the US, funded by either the DOE or the USDA. The US programme provides loan guarantees for the development, construction and retrofitting of commercial-scale bio-refineries. The maximum loan guarantee is $250 million and the maximum grant funding is 50% of project costs. Abengoa Bioenergy Biomass received a loan guarantee for $132.4m in 2011 for a cellulosic ethanol from agricultural & wood residues plant. The UK is likely to provide access to debt financing to projects through its Green Investment Bank (GIB).

Export Import banks in various countries provide financing for indigenous companies to  export to global markets. The US Export Import Bank has probably been the most prolific of the Exim banks globally, funding significant amounts for low carbon technologies. Typically, it provides up to 85% loan guarantee on the back of 15% equity from the investors. The focus is on commercially viable projects. However, not a great deal has gone to biofuels funding, largely because it does not receive as many applications from this segment.

Another form of financing for next generation biofuels is credit-enhanced bonds that are accepted through the USDA (Section 9003 Program) and Rural Energy for America Program grants (Section 9007), as well as some through the DOE.

As with any other business seeking finance, biofuel companies need to demonstrate that they have identified an opportunity in the market, have a solid business plan and a credible team to deliver on it.  The major difference with biofuels – particularly advanced biofuels – is that the opportunity is in a relatively new market that is largely dependent on government subsidies, and the company’s solution is a novel process amongst many such novel processes that are seeking dominance.

First generation opportunities can generally be funded though standard debt and equity channels.  Advanced biofuels technologies are still emerging from the demonstration phase, and unlikely to secure mainstream financing. What do these advanced biofuel developers need to demonstrate to investors? Before “going to market”, the company needs to be very clear about its place in the biofuels sector:

(i) Which conversion technology?

There are several viable conversion technologies competing and each has its virtues and flaws. All are currently entering the first commercial plant scale and the company must be clear why its particular conversion route is superior to others.

(ii) Advantage of the company’s technology?

The company must explain why its variation within the conversion route is best. It boils down to whether the company’s biofuel can enter the value chain at an all-in price (i.e., including government incentives, capital cost reduction expectation) that makes it more compelling than petroleum-based fuels.  Critically, given the risks to the intermediaries and end users of the company’s product, its biofuel needs to demonstrate a substantial benefit to that of its competitors.

(iii) What is your business model?

Original Equipment Manufacturers – engine companies like GE or Cummins – must be bought into the technology development to demonstrate their willingness to use the company’s biofuel in their equipment before others will invest.

It is worth noting that there are two types of investors: financial and strategic: 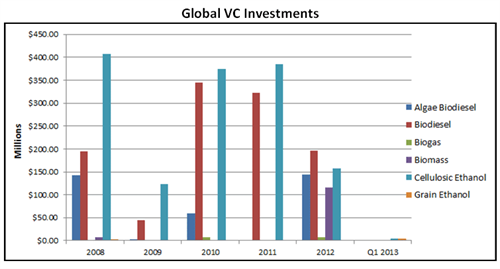 This article was first published in Biofuels International magazine, September/October 2013.

Read more about our work in low carbon technology innovation.