Andie Stephens debunks the headlines about the ICT sector’s climate change impact and explores the action being taken by businesses to create a sustainable future. 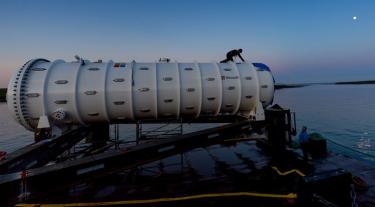 Microsoft's project Natick, a data centre which is stored underwater near the Orkney Islands for cooling purposes.

Big numbers grab headlines. This is to blame for the fact that there is a lot of misinformation and wildly inaccurate projections around the environmental impact of the ICT sector.

There are a number of myths and legends out there. A 2009 study in Japan projected by 2030 the country’s internet routers would consume the equivalent of all electricity used in Japan by 2005. More recently we’ve seen suggestions that Bitcoin could account for a similar level of electricity consumption to the entirety of Argentina.

As someone that works closely with the sector, I despair at some of the numbers thrown around. These often grossly overestimate the real impact of ICT energy use by some 10 to 50 times. And although it is true that global use of data is increasing a significant rate, this does not result in an equivalent increase in electricity and carbon emissions.

There are several reasons this happens. It is true that in previous years data centre electricity use was increasing dramatically – an average of nearly 9% a year in the US between 2000 and 2010 – so assumptions were made that this would continue. And lots of studies have used out-of-date or inaccurate data or assumptions to generate projections, or developed unlikely scenario models that were then reported as actual predictions.

There have also been some well-respected academics that have got their methodologies wrong. This tends to be either because they understand telecommunications very well, but not energy and carbon, or vice versa.

It’s true that there’s no easy way to accurately measure the true impact of ICT, but – in my view –one of the most reliable recent studies comes from Jens Malmodin of Ericsson Research and Dag Lundén of Sweden’s Telia. They both have a lot of experience in the sector and take a very detailed approach. More importantly they have access to actual electricity consumption data across multiple countries.

Their best guess for 2015 is that the ICT sector accounted for around 3.6% of all global electricity use and 1.5% of the greenhouse gas emissions. Or to split it out: data centres are around 1% of global electricity, ICT networks a further 1%, and end user devices (including home networks) account for the remainder.

There is also a separate category in the assessment – entertainment and media – which is not typically accounted for in the impact of ICT but in reality is very closely intertwined. This looks at the energy consumption of devices such as TVs and set-top boxes, which together make up a further 2.4% of global electricity use and 0.8% of greenhouse gas emissions.

The reality of supply and demand is that if ICT sector electricity use were wildly increasing, the cost of using the internet would probably be going up as well. Electricity use is a big cost for data centres, so there is a strong incentive to reduce it.

As a result, the efficiency of transmitting, processing and storing data has increased at such a rate that it is roughly keeping up with the increased demand for data. And this means that the electricity consumption of data centres and ICT networks has actually levelled off in recent years.

Today we are seeing huge amounts of innovation in efficient cooling for data centres, from advanced temperature and airflow modelling being used in design, through to novel cooling methods such as liquid cooling or adiabatic cooling. There’s also some exciting projects such as Microsoft trialling mini data centres on stored on the seabed, or the Green Mountain data centre in Norway that was built in former NATO nuclear bunker and cooled by cold water from a fjord.

There is also a trend towards larger hyperscale data centres, which are much more efficient than multiple smaller ones. And increasingly these are being powered with clean energy. Many of the world’s largest tech companies and network operators – including Google, Apple, Microsoft, BT, Telefónica and AT&T – are now committed to moving towards 100% renewable electricity.

This isn’t to say that there aren’t still some highly inefficient data centres out there, and in some parts of the world where they are powered with coal they can be a significant source of emissions. But fortunately energy regulation and market forces are gradually catching up with the laggards, and we are seeing a greater adoption of best practice thanks to initiatives such as the EU’s Code of Conduct for Data Centres.

What is important to remember is that although some of the headlines are enormous exaggerations, the total impact from ICT is substantial and the sector will need to take serious, co-ordinated action if we are to meet international ambitions on climate change. This means a relentless focus on energy efficiency, making the most of managing capacity and demand, and a total shift to the use of clean energy.

The good news is that the solutions to achieve this are all in reach with technologies that already exist. This means that with the right level of commitment the ICT sector could be amongst the first industries to reach zero emissions, becoming an integral part of the foundations of a low carbon economy and allowing businesses to succeed in a sustainable future