We need to both reboot and transform our economies if we are to achieve a green recovery. In the first of a series of articles drawing on discussions at our recent Corporate Sustainability Summit, we explore the scale of change needed to make this a reality. 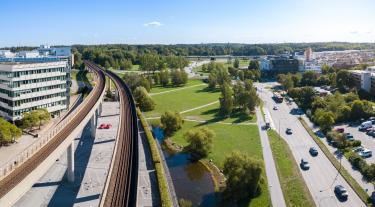 The risks and opportunities of a net zero carbon transition are starting to become more apparent, but the idea of net zero does not exist in a vacuum. “We have gone from the Paris Agreement to Greta Thunberg to Covid-19,” said Tom Delay, the Carbon Trust.

“The Paris Agreement was all about aligning around a common aim, Greta has engaged the future and sent a message to corporations and governments that the people who will vote, buy and save in future want action,” he said. “Meanwhile, the pandemic has shown us that we can change a lot more quickly than we thought we could.”

Additionally, as governments start to think about stimulus programmes to help their economies recover from the Covid-19 pandemic, the idea of ‘building back better’ and the net zero transition are at the heart of the conversation. “The green recovery touches on many of our priorities for recovering from Covid,” said Baroness Brown of Cambridge, Deputy Chair of the Committee on Climate Change and Chair of the Carbon Trust. “We expect a huge amount of global investment in sustainable energy in the next three years.”

“The green economic recovery has become a powerful rallying point,” said Carbon Trust Director Simon Retallack. “We need investment that not only reboots the economy but also transforms it to tackle climate change. We know that green investment generates jobs and tackles environmental problems at the same time.”

Spending on renewable energy is expected to pass oil and gas spending in 2021, Baroness Brown added. “I hope this is an economic tipping point. Almost three times as many jobs are created per pound spent on energy efficiency as on fossil fuels. That’s a really important message for our policymakers.” Energy efficiency jobs will be needed UK-wide, while many renewable energy jobs would be created in depressed coastal areas such as Hull.

“The pandemic has touched all of us and it has created an unconscious link with the environment and sustainability,” said Raimondo Orsini, Director of the Sustainable Development Foundation. “Everyone is thinking about how to change the future.”

Plus, in a break from the past, it is a conversation where investors and regulators are playing a central role, the summit heard. “The impacts of climate change, whether that is related to physical risks or transition risks from political measures to manage and mitigate climate impacts, will have a real impact that is core to companies’ understanding and management of climate risks,” said Anna Sweeney, Executive Director, Bank of England.

An example of these transition risks is the recent announcement by President Xi Jinping that China’s carbon emissions would peak by 2030 and that it would be a carbon neutral economy by 2060. “This will have a profound impact on all sectors of the economy in the coming decades,” said Dr Ma Jun, the Chair of the China Society for Finance and Banking’s Green Finance Committee. “Every single ministry, locality and financial institution is discussing how to meet this objective.”

Meeting these targets is clearly a huge task, but Lei Zhang, founder and Chief Executive of Envision Group, said that “once China has achieved a consensus internally, it should be able to move much faster and achieve net zero by 2050”. He highlighted how the country was set to meet its 2030 target of 20% non-fossil fuel energy by 2025. “Things are moving very fast here,” he added.

The UK has shown that it is possible to grow the economy while reducing emissions, pointed out Baroness Brown. “We have been almost apologetic about it when, in fact, we have increased GDP because we have reduced emissions, not in spite of it. Studies have shown that Australia could unlock $63bn of investment over the next five years if it aligns its policies with net zero.”

For the finance community, “this is about risk and opportunity,” said Sir Roger Gifford, Chair of the UK Green Finance Institute. “The risks are becoming clearer and clearer. The combination of government action and the environmental changes we are seeing is enough to encourage companies and investors to integrate climate risk into financial planning.”

Ma suggested that there should be a ‘brown taxonomy’ so that investors know what their exposure is to high carbon assets. “We need compulsory disclosure of brown assets so that institutions will realise and quantify the financial risks from high exposure to these assets,” he asserted.

Businesses are now more open to taking a leading role in the green transition, said Orsini. “Until 10 years ago, business was resistant to targets and rules, but now they accept that they are a part of the green revolution and that they can play a leading role.”

Some of the solutions to the green transition will be simple, said Judith Gough, the British Ambassador to Sweden, while “some will require good policy-making, some rely on good business leadership – not just in climate change technologies but also financial options”

The scale of change

Government can really encourage change with the right policies, as evidenced by UK policy on offshore wind, according to Baroness Brown. “But we need to see that change across the economy, because we have just upped the ante and moved from an 80% target for emissions cuts to net zero by 2050.

“The UK will need to at least double the size of its electricity system, increase the amount of offshore wind tenfold, create a hydrogen industry at something like the scale of the current electricity system, develop a carbon capture and storage (CCS) industry, increase tree-planting by three to five times and 30m buildings need insulation and low carbon heat, while we also need to decarbonise transport, change the way we use land and do agriculture, and considerably reduce our consumption of meat and dairy,” she added. “That’s an awful lot of change to deliver in the next 30 years.”

On top of that, we will have to adapt to the changes a warmer climate will bring and be resilient to those changes, such as a doubling of the chances of significant flooding, significant water deficits, increased heat mortality and lower crop yields.

That will require not just commitment from business, government and regulators but also clearly-understood standards around what constitutes green investment. “The EU Taxonomy is something that can really help us in distinguishing green projects from brown ones,” said Orsini.

The increasing digitisation of the economy, which has been accelerated by the pandemic and the lockdown, will also help, Gough pointed out.

“We need to ramp up connectivity,” agreed Shirley Rodrigues, Deputy Mayor, Environment and Energy at the Greater London Authority, “but we also need to tackle inequality. Many people don’t have access to the internet, let alone high-speed internet.”

Sustainability is at the heart of all the important decisions that companies make, said Hugh Jones, Managing Director, Advisory at the Carbon Trust. “Net zero really has to underpin everything that business, government and society as a whole does if we’re to have a chance to meet our targets.”

Towards a net zero recovery: a stimulus plan

Learning from coronavirus: why 2020 matters for climate

A new era for supply chains