COP26: Genuine progress? Or too little, too late?

Simon is a Director at the Carbon Trust and has been working on sustainability and climate change for well over 20 years. Prior to joining the Carbon Trust in 2010, he oversaw the Institute for Public Policy Research’s climate change team and led the Secretariat for the International Climate Change Taskforce, which provided evidence-based advice on addressing climate change at the international level for the UK’s G8 Presidency. He currently leads the Carbon Trust’s work across Latin America. Having attended several COPs over two decades, he has a unique perspective on both the ambition and impact of these summits. 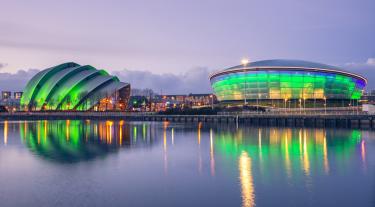 As my train pulled into Glasgow Central Station on a cold, sunny afternoon two weeks ago, I wasn’t sure what to expect – either of the city, or the delayed 26th conference of world governments that since 1994 has convened to address climate change that was taking place there. I soon discovered that Glasgow is beautiful – with street after street of Victorian terraces in honeyed sandstone, large open squares, green spaces and the sparkling River Clyde. But would what emerged on climate change from two years of largely remote diplomacy followed by two weeks of intense face-to-face negotiations be as attractive?

The world has come a long way on climate since I attended my first Conference of the Parties (COP) in 2000 in The Hague. But, over the last two years, we have seen governments around the world desperately grappling with the worst pandemic since 1919. We’ve observed the planet’s largest emitters, China and the US, become increasingly at loggerheads, and the UK Government, co-hosts of COP26 with Italy, has had its hands full separating itself from the European Union since Brexit. What could realistically be achieved?

If COP21, which produced the Paris Agreement on Climate Change, was about setting a long-term goal and providing a global framework for countries to operate in to address the climate crisis, COP26 was about ensuring countries’ near-term commitments were ambitious enough. It represented the first opportunity to use the mechanism built into the Paris Agreement to require countries to submit revised Nationally Determined Contributions (NDCs) every five years in alignment with the Paris Agreement’s goal of pursuing efforts to limit the increase in global average temperature to 1.5°C.

Even in Paris, governments knew that the original set of NDCs they submitted then did not go far enough and would have led to warming of between 2.8-3.7°C. So what difference did COP26 make to that?

In the run-up to the COP, several major emitters submitted significantly stronger targets, including most developed economies, such as the United States, the European Union, the UK, Japan, Canada, as did several leading middle-income economies including Argentina, Chile, Colombia, Nigeria and South Africa. More ambitious NDCs were also announced at the COP itself by India, Vietnam and Thailand.

However, there were notable exceptions. China and Russia’s NDCs only had minor adjustments, Indonesia’s did not improve at all, and Brazil and Mexico’s became even less ambitious than before.

As a result, the collective impact of the revised NDCs submitted will be to limit temperature rise to 2.4°C – clearly very far from what is needed. The way the Paris Agreement was structured – essentially creating a bottom-up framework in which governments volunteered commitments rather than a top-down one where targets were negotiated in line with a global goal – meant that there was always going to be limited scope for the actual talks in Glasgow to alter the ambition of NDCs submitted.

However, what surprised me most from my time in Glasgow, was witnessing first-hand how the hosts, working alongside a progressive alliance of countries and organisations, managed to engineer agreements that went well beyond the revision of NDCs to drive real progress across a number of fronts.

Four reasons to be optimistic about the outcome of COP26

1. Most of the world is now covered by Net Zero commitments

Over the last few months, Europe has been joined by the US and China, among many others, in committing to Net Zero. At the COP in Glasgow, to many observers’ surprise, the Net Zero club was joined by another major emitter – India (which simultaneously committed to generate 50% of all its electricity needs from renewables by 2030). This is a big deal which few would have believed was possible until recently. The global coverage of Net Zero commitments is transformational – no longer are countries haggling over percentage point reductions in emissions – the destination is very clearly zero. Whether you’re working in government, in business or in finance worldwide – you know where we are all heading and it’s a very different world. It also makes a big difference to our ability to get closer to the Paris temperature goal: if countries meet their Net Zero promises (admittedly a big if), global warming would be reduced to around 1.8°C by 2100.

2. A signal has been sent that the era of coal is ending

The Glasgow Climate Pact commits governments to “accelerating efforts towards the phasedown of unabated coal power and phase out inefficient fossil fuel subsidies.” A lot of coverage has been given to the substitution of the term “phase-out” by “phasedown” at the insistence of India and China in the final hour of the negotiations. However, this should not distract from the significance of what happened in Glasgow. It marks the first time in nearly three decades of climate diplomacy that governments have committed to reducing coal use in the official agreement. It was also accompanied by other initiatives launched in Glasgow which signal the end of the coal era, such as the pledge by 23 countries – including Indonesia, Vietnam, Poland and South Korea (all heavy coal users) – to phase-out coal, and the commitment of 39 countries and multinational agencies to end new direct financial support for unabated fossil fuels by the end of 2022. Now more attention needs to turn to oil and gas – building on the momentum created by the Beyond Oil and Gas Alliance launched in Glasgow to facilitate the managed phase-out of these fossil fuels.

3. Powerful commitments were made to redirect finance

Developed country governments have been criticised for missing their 2020 deadline for providing $100 billion per year in climate finance for developing countries (it will now happen from 2023). But while this was a missed opportunity to build goodwill among developing countries, public funding was never going to be enough to decarbonise our economies – unlocking private investment was always more important and here we saw real progress in Glasgow. Banks and asset managers representing 40% of the world’s financial assets – more than 450 firms representing $130 trillion of assets – signed up to the Glasgow Financial Alliance for Net Zero and have committed to reach Net Zero carbon by 2050, with 2030 goals. While signatories still need to set out action plans and not all the capital under management by alliance members is allocatable, it still represents a huge pool of money that can be invested in decarbonisation. We also saw important announcements on mandatory disclosure and rules for new carbon markets, which could be another important source of finance for clean energy, as long as those businesses which participate in it ensure that they are credibly contributing to global emissions reductions.

4. Crucial steps were taken to drive down emissions beyond the energy sector and carbon

We can’t prevent dangerous climate change without protecting the world’s natural carbon sinks, notably the world’s carbon-absorbing forests, nor can we do so unless other greenhouse gases such as methane (25 times more powerful as a heat-trapping gas than CO2) are reduced too. In Glasgow, 130 countries signed the Glasgow leaders’ declaration on forests and land use, committing to halt and reverse forest loss and land degradation by 2030. To many people’s surprise, the signatories included deforestation hot-spots like Brazil and the Congo, and came with nearly $20 billion to support work to protect, restore and sustainably manage forests from 12 countries between 2021-2025. On methane, 109 countries representing nearly half the global methane emissions and 70% of global GDP signed a pledge to cut their methane emissions by 30% over 2020-30, using the best available inventory methodologies to quantify emissions. Although signatories still need to spell out their individual targets and policies to achieve this goal, it could represent a game-changer for a long-ignored greenhouse gas.

The world has come a long way on climate since the first COP I went to 21 years ago. We may take it for granted now, but back in 2000, climate change was still a marginal issue politically and for the public, countries were nowhere near agreeing a global temperature target of any kind. We couldn’t have dreamt that governments would actually agree to zero emissions targets, and as much as we could see it was needed, no country had agreed to get out of coal, stop subsidising fossil fuels, or stop deforestation. On the journey from Paris to Glasgow, all those developments are now within our grasp.

Credit is due to the UK and Italian Presidency of COP26 and their partner organisations for pulling together so many agreements in advance of the meeting in Glasgow which resulted in a huge injection of momentum into the discussions. The energy felt at Glasgow was like nothing else I have experienced at any previous COP.

Priorities for the next 12 months

We need to keep that momentum going now to fix the problems that were left unresolved in Glasgow. In particular, pressure needs to be increased on governments that did not toughen their NDCs, using the ratchet agreed in the Glasgow Climate Pact (another surprising outcome of COP26), requiring governments to strengthen their 2030 targets to align with the Paris temperature goal by the end of 2022. To do that, governments need to be bolder in linking progress on issues like trade and security to action on climate, campaign groups need to keep up the pressure on developing and developed countries that need to do more, and the media needs to keep the spotlight on climate change turned on.

Developed countries also need to do better on climate finance by the time they meet at COP27 in Egypt. They need to honour their commitments on $100 billion and double the finance provided for adaptation, as requested in the Glasgow Climate Pact. They must also take seriously the dialogue created at this COP to develop and operationalise a new “Loss and Damage” mechanism to compensate developing countries for climate impacts, as well as take meaningful steps to help ensure a just and inclusive transition for those communities most affected by the transition away from fossil fuels. This is vital to build trust and facilitate further ambition from key emerging economies.

Lastly, we will all need to be more vigilant in exposing greenwashing and, above all, keep up the pressure on governments and corporates to turn their pledges and promises into action. The mantra needs to be “implement, implement, implement!” If we can do that, Glasgow will be remembered as a turning point in humanity’s journey to address climate change and not just a beautiful city on the Clyde.