First steps in emissions reductions: energy efficiency in your own operations

Sustainability starts at home and there are some simple actions that many companies are taking . 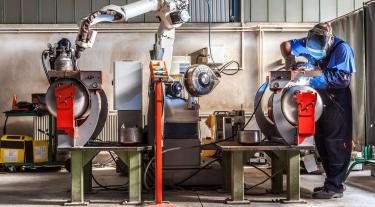 Before embarking on any journey, people like to make sure their house is in order. It’s no different with the process of setting out to become a low carbon company. Leaders stress that taking the simple first steps – upgrading an inefficient HVAC system, powering down computers at night – may not seem that exciting but can provide easy wins that then inspire people in the enterprise to do more.

A common pattern can be seen among companies that have developed carbon reduction strategies, says Sonya Bhonsle, head of supply chain at CDP. “Step one is benchmarking and disclosing – calculating the emissions in their own operations,” she says. “Then they set a soft target, embark on activities to reduce their emissions and then move to something more forward thinking – setting targets that are aligned with science.”

This approach is something that Eric Soubeiran, global nature and climate director at the food company Danone, recommends. “You talk to people in your own factories about something they do every day,” he says. “I’m not saying it’s easy, but it’s probably the most direct and straightforward strategy you can start with.”

Of course, energy efficiency can be laborious – a matter of scouring every corner of factories and workstations, heating and cooling systems, looking for savings here and there. Plus, while LED lighting, motion detection sensors, smart meters and other technologies can help, the human factor is also important to address.

“We’ve had campaigns where someone goes around and puts a sticker on people’s screens if they haven’t turned it off,” says Gabrielle Ginér, BT’s head of environmental sustainability. BT also appoints energy champions with responsibility to look around for savings.

It helps that the payoffs are relatively fast. Energy saved and emissions saved also means money not spent, as thyssenkrupp has found. With annual energy consumption of the continuing operations of more than 70 terawatt hours, energy efficiency makes a lot of business sense for the company. Through measures such as improved use of waste heat, reduction of standby times and replacement of inefficient plant components, it achieved efficiency gains of 330 gigawatt hours in the group’s fiscal year 2016-2017, exceeding its goal of 125 gigawatt hours. This allowed it to avoid more than 100,000 tonnes of greenhouse gas emissions while also saving money.
Yet as Danone’s Soubeiran argues, the benefits of this approach go beyond cost savings. Enabling employees to become energy champions will help once the company starts to work with suppliers when looking outside its own four walls for savings. “You make your own people advocates of the climate trajectory,” he says. “You raise awareness, you have the efficiency discussions and you have the savings. It’s a triple win.”

While many argue that more work can be done to increase energy efficiency, at some point this cannot be the only strategy that companies use. Achieving low or no-carbon operations also means finding clean sources of power – wind power, solar and other forms of renewables. However, companies can only do so if there is enough renewable energy to go around and at a price that makes business sense.
In places where the supply is insufficient or too expensive one solution is to build your own generation plants. This is something Tetra Pak is doing by installing solar panels on the roofs of its plants where possible. As a result, its factories in Sweden, Denmark, Finland and South Africa now use electricity from 100 per cent renewable sources and 17 of its most important sites now run exclusively on renewable electricity.

Where this is not possible, it purchases international renewable energy certificates. “We believe I-RECs are strong mechanisms to guarantee that, in places where we can’t generate renewable energy ourselves because of lack of space or supply, we can buy certificates from other operators who are producing renewable energy that would otherwise not be placed in the market,” says Mario Abreu, vice-president of sustainability at Tetra Pak.

In the end, critical mass may be what solves the problem. For example, a growing number of companies are signing up to RE100, an initiative through which leading companies have committed to making 100 per cent of their power use from renewables. Those behind the initiative — The Climate Group in partnership with CDP — hope that not only will this increase the use of clean energy but that the global appetite of large businesses will create new demand, expanding the supply and bringing down prices. “The capacity for buyers to influence emissions is enormous,” says Bhonsle.

Listen to the full series