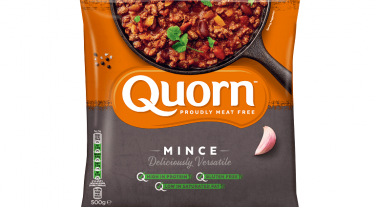 Quorn Foods, founded in 1985, is the world’s leading manufacturer of meat-alternative products. To demonstrate the environmental credentials of its products, Quorn partnered with the Carbon Trust to independently certify reductions in the carbon footprint of its products.

The company is headquartered in the UK and is part of the Philippine-based food corporation Monde Nissin. Quorn Foods exports its products to a range of global markets, including several European countries, the United States, South Africa, the Philippines, Thailand, Australia and New Zealand.

With a range of products that offer consumers an alternative to animal-based protein, Quorn Foods recognises that environmental concerns are often a key motivation for many of their rapidly growing customer base. Sustainability was also an important element in the founding of the company, as this was a key driver behind the research and development of mycoprotein, the primary ingredient in the company’s products, which is made by fermenting a natural, nutritious fungus.

To demonstrate the environmental credentials of its products, Quorn first partnered with the Carbon Trust in 2012 to independently certify reductions in the carbon footprint of its products against the standard, PAS 2050. This was communicated to customers through the use of Carbon Trust footprint label on the packaging of certified products, including Quorn mince and chicken style pieces. The company also reports these details on its website and sustainability reports.

At the same time, the company wanted to understand how its core products compare to animal-based proteins on a full life cycle basis. To do this the Carbon Trust independently verified the footprinting models Quorn had developed for its products’ emissions in different parts of the world, allowing these to be credibly compared against life cycle footprints for meat. This was used as the basis for the company’s claims that Quorn’s beef-alternative products can have a carbon footprint up to 13 times lower than beef, and chicken-alternative products up to 4 times lower than chicken.

The company has since successfully achieved recertification to the Carbon Trust footprint label every two years. Thanks to continued work to improve efficiency and sustainability in its operations and supply chain, in its most recent recertification in June 2017, Quorn was able to demonstrate a reduction in the carbon footprint of its chilled chicken-style pieces and mince by 15%, with a 5% reduction shown in the footprint for the core mycoprotein ingredient.

Taking a strong focus on reducing the emissions of its products has allowed Quorn to successfully decouple business growth from emissions, achieving a reduction in emissions per tonne of 26% between 2012 and 2017, despite increasing production volumes by around 30,000 tonnes over the same period. Product footprinting has also helped identify greenhouse gas emissions hotspots within Quorn’s supply chain. This has enabled the company to take steps to more effectively engage with its suppliers and reduce emissions outside of its operational control.

Over the past few years consumer demand for meat alternatives has grown by numbers that we could not have anticipated. We are incredibly proud that, as we have scaled up our operations and increased sales of our products, we have continued to make real reductions in our environmental impact. The Carbon Trust has been a key partner in our journey to achieving these reductions, and the footprint label helps us to transparently, and confidently communicate sustainability initiatives to our partners and customers.

Find out more about our product carbon footprint label

Discover more about how we can verify that your brand is working to measure and reduce your product’s carbon emissions with our product carbon footprint label.